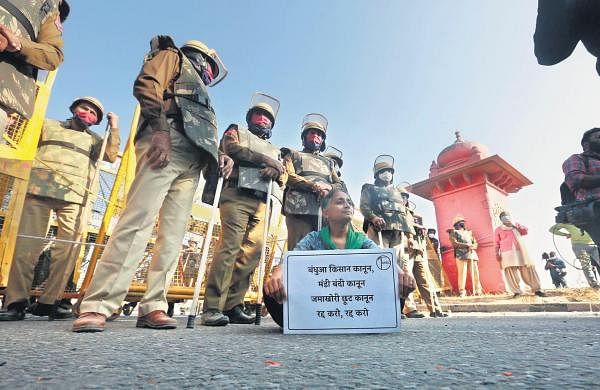 CHANDIGARH: Around 10 people were injured on Saturday as police allegedly lathicharged a group of farmers disrupting traffic movement on a highway while heading towards Karnal in Haryana to protest against a BJP meeting.

The police, however, said only four protesters were injured, while ten cops also sustained injuries.

The state police drew severe criticism for the action against the farmers, and several roads and highways, including toll plazas, were blockaded at different places in protest for hours.

Several commuters were left stranded at highways for hours.

However, Haryana’s Additional Director General of Police (Law and Order) Navdeep Singh Virk said that only four protesters were injured, while ten cops sustained injuries in the incident.

He said some protesters pelted stones at the cops and tried to attack them.

He said farmers gathered at the Bastara toll plaza, blocked the national highway and later tried to forcibly move towards Karnal city despite being stopped by police and persuaded not to move ahead, but they allegedly used violent means.

After the incident, senior Samyukt Kisan Morcha (SKM) leader Darshan Pal said SKM gave a call for road and toll plaza blockade till 5 pm Saturday to protest injuries to dozens of farmers and detaining of some farmers by Karnal police.

Several protesters present at the site near the Bastara toll plaza around 15 km from Karnal claimed to have witnessed 8-10 people sustain injuries in the police action.

Karnal police IG Mamta Singh, however, told PTI, We used mild force because they were blocking the highway. Some stones were also pelted towards the police. Mild force was used to disperse the protesters.

She said some protesters were earlier in the day detained for maintenance of law and order and they were being released.

Farmers protesting the central farm laws have been opposing public functions of the BJP-JJP combine in Haryana.

Several farmers had gathered at the Bastara toll plaza near Karnal, responding to a call given by the BKU.

Citing section 144 of the CrPC imposed in the area banning assembly of five or more people, the police made several announcements over loudspeakers, declaring the gathering by the protesters “unlawful”.

Initially, they asked the farmers to disperse, but resorted to force as the protesters refused to budge.

The police said the protesters were bent on moving towards the venue of the BJP meeting in Karnal.

All roads leading to the venue had been heavily barricaded.

“Many farmers were injured after police brutally lathicharged them without any provocation. Some even could be seen with blood all over their clothes,” Haryana BKU leader Gurnam Singh Chaduni said, strongly condemning the police action.

He said that as part of their ongoing agitation against the farm laws, the farmers had decided to hold a peaceful protest against BJP leaders, for which they had assembled at the Bastara toll plaza.

Chaduni said orders were given by an official that if anyone who tries to head towards the BJP meeting venue should be lathicharged.

The use of force by the police invited severe criticism from various political parties.

Expressing shock at the “brazen brutality” of the Haryana Police, Punjab Chief Minister Amarinder Singh slammed his Haryana counterpart Manohar Lal Khattar for “unleashing such a vicious assault on the peacefully protesting farmers, many of whom were injured in the lathi-charge.

“CM-Dy CM’s conspiracy to attack farmers in Karnal is clear from the orders of the Duty Magistrate, who is ordering the police to break the heads of farmers and lash them with sticks.

BJP-JJP is the ‘General Dyer’ government,” he said in a tweet in Hindi.

“Khattar Sahib, Today in Karnal sticks have been blown on the soul of every Haryanvi. The oppression of the sinful BJP government that bleeds farmers is like demons. The coming generations will remember the blood from farmers’ bodies flown on the streets,” he said in another tweet.