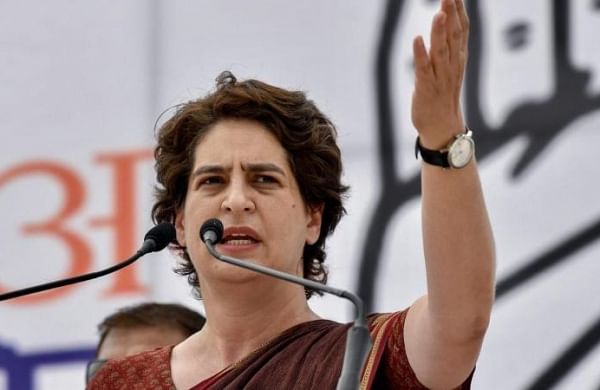 LUCKNOW: Kicking up a political row of sorts, UP Congress has released a booklet to sensitise its cadre. However, the 24-page booklet goes on to target the Congress rivals including BJP, SP and the BSP alike calling them partners in crime for over three decades.

The motive of releasing the booklet is to train the Congress workers who have been named “Vijay Sena” (army for victory) in the run-up to the Uttar Pradesh assembly election due early next year.

While the BJP and SP chose to ignore the 24-page booklet titled “Kisne Bigada Uttar Pradesh” (who contorted Uttar Pradesh), BSP chief Mayawati reacted to it sharply advising Congress to focus on its shortcomings which depleted its base not only in UP but across the nation.

However, an SP MLC said that his party did not mind what Congress said. SP’s fight was with the BJP only.

Carrying the caricatures of UP CM Yogi Adityanath, SP chief Akhilesh Yadav and BSP president Mayawati on the front cover, the booklet calls the BJP a Bharatiya Jumlebaaz Party and provides a list of its alleged unfulfilled promises on the back.

When confronted, BJP spokesman Rakesh Tripathi said that the grand old party was rejected by the people of the state in successive Lok Sabha and assembly elections. He claimed that AICC general secretary and the party’s UP in-charge  Priyanka Gandhi used to visit UP as a tourist levelling fake allegations on rivals.

In the booklet, the party has claimed that Uttar Pradesh is at the bottom in terms of income of farmers, employment, education and health. It adds that the state tops in malnutrition, crime against women and girl child, infant mortality rate and maternal mortality following corruption and successive misrule of BJP, BSP and SP governments during the last 32 years.

The party is imparting training, as claimed in the booklet, to two lakh workers of “Vijay Sena” at 700 “Prashikshan se Parakram” (training for valour) camps ending on September 7, 2021.

According to UPCC chief Ajay Kumar Lallu, Congress’s Vijay Sena will go from door to door to tell people how the 32-year rule has led to UP’s decline.

Mayawati has been addressed as Daulat Ki Beti (daughter of wealth and not of a Dalit). The chapter on the BSP’s “misrule” alleges that Mayawati is the only leader who sells her party’s tickets for crores. Listing scams during BSP rule, the booklet says Mayawati is fond of wearing garlands of currency notes.