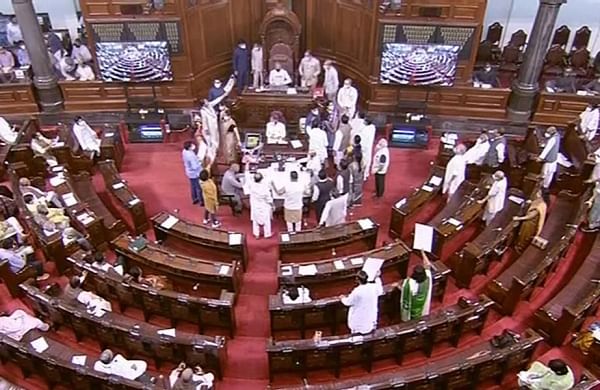 NEW DELHI: Despite the highest disruption in the recently concluded monsoon session of Parliament in the last seven years, the number of bills passed per day during this session of Rajya Sabha was the second-highest since 2014, said sources.

With over 74 hours and 26 minutes lost due to protests by the Opposition on various issues, the Upper House passed 1.1 bills per day in 17 days sitting.

In 2020, when the nation was reeling under the effect of COVID-19, the Rajya Sabha passed 2.5 bills per day, the highest since 2014, during the monsoon session.

As per sources, the Central government successfully carried out its business during the session. This reflects the commitment, productivity and ability of the government to drive the legislative agenda in the Parliament, which aims to fulfil the aspirations of its citizens.

However, this session saw a lot of disruption by opposition parties over issues including farm laws, Pegasus spyware, COVID-19, and inflation.

The highest average time lost per day due to interruptions or adjournments since the 231st session of Rajya Sabha in 2014 is 4 hours 30 minutes.

The sources said that the unruly behaviour of some members was totally unacceptable.

“Disruption of House pre-planned, washing out the session was their ultimate goal. Some Opposition members desecrated the sanctity of the House by climbing the Sanctum Sanctorum (Garbhagriha), namely the table located at well of the House and threw the Rule Book at the Chair. This behaviour is highly condemnable,” they added.

Sources said the House has been a forum for debate but such instances have resulted in lowering the dignity of this great institution Opposition should apologise to the Chairman and people of the country.

A special committee should be constituted to look into these incidents, they said.

The Rajya Sabha was adjourned sine die on Wednesday, two days before the scheduled conclusion of the monsoon session of parliament. The session commenced on July 19.

Childhood getting lost in cages of beliefs, need to break these bars: Sisodia