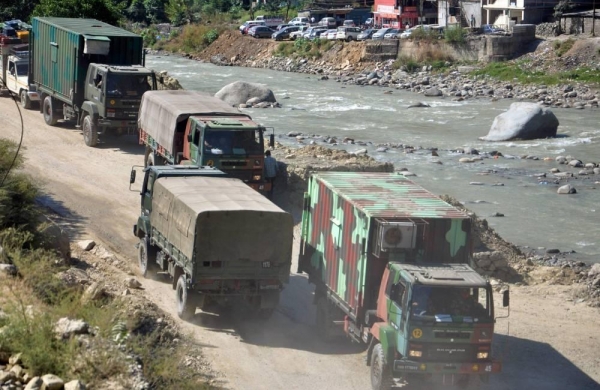 Express News Service
NEW DEHI: The standoff in Eastern Ladakh is stuck as Indian Army and Chinese People’s Liberation Army have differing approach on troop presence and their withdrawal from standoff points. There have been major parlays, at various levels to sort out the standoff. Also, this time the numbers of the contentious locations along the LAC in Ladakh have increased.

An official aware of the developments told, “While Chinese PLA is pressing to de-escalate and then disengage, Indian Army has made it clear that unless the Chinese troops move back to the pre-May 5, 2020 positions India will not move its troops back.”

The Chinese want Indian Army to move out all its soldiers which got deployed after the May 5, 2020 stand off which began with the clashes between the troops at Finger 4 on the north bank of Pangong Tso. It later spread out to multiple points including Hot Spring, Gogra, Galwan and Depsang.

A distinct change this time is the increase of on ground friction positions which total to 17 such locations along the 832 kilometer long LAC in Ladakh.

“Amidst the standoff there is an increase of five friction points which include area around Kilometer 120 in Galwan, PP 15 and PP 17A at Shoksha La on the North of the Pangong and Rechin La and Rezang La on the South of Pangong,” added the official.

With the rise in disputes, there has been increase in the communication between the PLA and the Indian Army in order to resolve the protracted tensions along the LAC which led to deadly duels in Galwan which claimed lives on both sides.

There have been frantic talks which used to be up to five hotline calls in a day. “There has been no gap in communication as there were 11 SCML, 10 HCML, 55 Delegation Level ( Sector Commander or Brigadier level) talks. The Hot Line talks in this period has been 1450 times.”

The hotlines have been set-up at Daulet Beg Oldi (DBO) and Chushul in Ladakh. The last SCML or Corps Commander level talks were held on April 9 this year.

Indian and Chinese Corps commanders plan to meet for the 12th Round within a fortnight to take ahead the disengagement process. “There are good chances that the two sides agree to disengage from Gogra and Hotspring,” said another official. But there is a trust deficit which will take time to regain and under the new Memorandum of Understandings and Agreements s the Chinese have broken all the past agreements told the officials.

Amidst the talks the Chinese have been furtively building permanent structures on their side. “It reflects their intention as it is an important facto,” the officials remarked.

There has been no attempt to reoccupy the positions which were vacated by the Indian sides and the Buffer Zones at various places still exist but it varies at different points.

As for the troops, the Chinese were resorting to quick rotations at the heights. “The PLA rotated it troops from Rechin La and Rezang La in 10 days.”

The Indian troops were better acclimatized but they also rotated troops with the frontline troops falling back in the habitat which have been made close to the frontline areas.