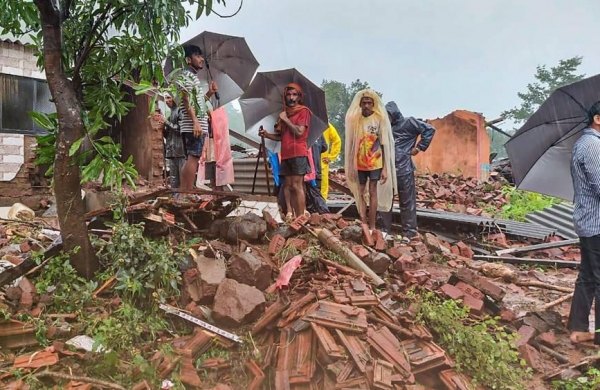 By Express News Service
MUMBAI/PUNE/RAIGAD: As many as 129 people have died in rain-related incidents, including multiple landslides, in Maharashtra over the last two days, while 84,452 people under the Pune division were shifted to safer places on Friday as heavy showers continued to wreak havoc in the state, officials said.

The deceased included 38 people who perished in a landslide in a village in the coastal Raigad district’s Mahad tehsil on Thursday, a senior official from the state disaster management department PTI.

Eleven people, including eight Nepalese workers, were rescued in the nick of time before the bus in which they were traveling was swept away in a flooded river in Western Maharashtra’s Kolhapur district on early Friday morning, police said.

“The death toll in Maharashtra in the last 48 hours has reached 129. Most of the deaths are from Raigad and Satara districts,” the official said.

Besides landslides, several people were swept away in floodwaters.

A huge landslide at Taylee village in Mahad, Raigad district washed away 35 houses. Thirty-eight bodies were recovered and an equal number of people are feared trapped under the debris. The landslide occurred on Thursday night when people were sleeping. At least 23 animals were also reported to have died in the earthslip.

The official put the death toll in various incidents in Western Maharashtra’s Satara district at 27.

Other fatalities included those reported from eastern districts such as Gondia and Chandrapur, he said.

The landslide in Raigad district took place near Talai village in Mahad tehsil on Thursday evening.

NDRF teams and local officials were engaged in rescue work in Mahad.

But no deaths have been confirmed in the two incidents by local officials so far.

Besides, 10 persons were feared trapped after a landslide in the coastal Ratnagiri district.

Eleven people, including eight Nepalese workers, were rescued in the nick of time before the bus in which they were traveling was swept away in the flooded Chikodi river in Kolhapur district, police said.

The incident took place around 2.30 am at Pangire village in Bhudargad tehsil.

A case was registered against the driver of the private bus, Ajit Pardeshi (39), for reckless driving, the police said.

Pardeshi was detained and booked IPC section 307 (attempt to murder) driving on the flooded bridge, they said.

In another incident in the wee hours of Friday, a Ratnagiri-bound bus of the Karnataka government’s transport service got stranded in water on Kolhapur-Panhala road.

As many as 25 passengers were safely evacuated, the police said.

As many as 84,452 people, including over 40,000 in Kolhapur district, were shifted to safer places in Western Maharashtra’s Pune division as rains battered the region and rivers were in spate, officials said.

The Panchganga river near the Kolhapur city was flowing at a level higher than that witnessed during the peak of floods in 2019, officials said.

Besides Pune and Kolhapur, the division also includes the districts of Sangli and Satara.

Satara is hit hard, especially by heavy rains and landslides.

Six teams of the Indian Army and Navy are expected to join the rescue work on Saturday morning.

As many as 54 villages were completed affected due to the floods while 821 were partially affected, officials said.

As many as 40,882 persons have been shifted from flood-affected areas in Kolhapur district alone.

Five people — two in Radhanagari, two in Chandgad and one in Kagal tehsil — died in rain-related incidents in Kolhapur district, officials said.

At least 39 roads, including 10 state highways, are closed for traffic due to the floods in Kolhapur district.

Three NDRF teams have been pressed into rescue operation.

“Five additional teams of NDRF have been sought. One team of the Army is also reaching,” the officials said.

In neighboring Sangli district, over 36,000 people from 7,000 families have been shifted to safer places, the officials said.

The Maharashtra government announced an ex-gratia of Rs five lakh each to the kin of people who have died in landslides triggered by heavy rains in different parts of the state.

A statement from the Chief Minister’s Office in Mumbai said, Chief Minister Uddhav Thackeray, who announced the financial assistance, also expressed grief over the loss of lives.

The statement said landslides have been reported in ten places spread across Raigad, Ratnagiri and Satara districts.

The injured will be treated in hospitals at government expense, the statement said, without disclosing their figure.

No immediate relief appears in sight as the India Meteorological Department issued a red alert for six districts which have been already pounded by downpour, forecasting “extremely heavy” rainfall and recommending preventive actions.

The alert was issued for the next 24 hours for the districts of Raigad, Ratnagiri and Sindhudurg in coastal Konkan and also for Pune, Satara and Kolhapur in Western Maharashtra.

Earlier in the day, Thackeray visited the disaster management authority control room in Mantralaya (state secretariat) in south Mumbai and took stock of the situation arising out of downpour and flooding in Konkan and western Maharashtra.

Thackeray said people residing in hilly and landslide-prone areas of the rain-ravaged Konkan region are being evacuated and expressed grief over the loss of lives in landslides, according to the CMO statement.

He appealed to people to cooperate with the local administration in the evacuation process in vulnerable areas in the coastal region.

Thackeray asked people to be alert in the backdrop of the IMD forecasting heavy rains in the next two days in several parts of the state.

He said the local administration should work in coordination for smooth relief and rescue operations in the rain-devastated areas.

Due to discharge of water from the Koyna dam in western Maharashtra, an alert has been sounded in Sangli and Kolhapur districts.

The chief minister asked the authorities to ensure distribution of food, water, medicines and clothes to the people displaced by floods and heavy rains, the statement said.

He said the flood-affected districts of western Maharashtra top the list of coronavirus cases and rescue operations there should be done by adhering to COVID-19 protocols, especially use of face masks.

As many as 14 NDRF teams have been deployed in the affected areas, the chief minister said.

He said 500 people have been rescued in Chiplun in Ratnagiri district and four relief centres have become operational in the coastal town, around 250km from Mumbai.

Raigad and Satara districts bore the maximum brunt of the rain fury.

“But since the roads leading to the spot were blocked due to the floods and the sludge, the rescue teams found it difficult to reach the site,” she said.

“The operation resumed today morning and the bodies were recovered by afternoon,” she added.

According to officials, there are around 30 houses in the village, which were completely damaged due to the incident.

In the 24 hours ended at 8.30 am on Friday, 165 mm average rainfall was recorded in Raigad district.

Rivers like Pundlika, Aamba and Savitri were flowing above the danger mark.

Chief Minister Thackeray expressed grief over the loss of lives in the Raigad landslide and spoke to the collector about the flood situation on Mahad, the CMO release said .

Thackeray directed the district administration to expedite rescue operations and clearing of roads.

The water levels have receded but in hilly areas, roads and bridges have been washed away.

Around 2,000 food packets have been distributed to people in Mangaon in Raigad district, the release said.

Since July 19, seven persons have drowned at different places in Raigad district, while three persons were still missing, the officials said.

As water of the river Ulhas entered some homes in Karjat taluka of Raigad district, 80 people were shifted to safer places, they said.

As many as 200 people from 57 families in Khalapur taluka were also moved to safety, the officials said.

Water from the overflowing Ulhas river entered a poultry farm in Karjat taluka, affecting 22,000 birds, while 23 goats died when their shelter collapsed in the same taluka, they said.

A bridge connecting Mhasala and Shrivardhan talukas was closed for traffic after it got submerged in rainwater.

An old road connecting Poladpur and Mahabaleshwar in Satara district also under water, the officials said.

As much as 480 mm rainfall was recorded in Mahabaleshwar, a popular hill station in Satara district in the last 24 hours ended at 8.30 am on Friday, they said.

Meanwhile, a team of the Thane Disaster Relief Force (TDRF) has been dispatched to Mahad taluka in Raigad district to help in rescue and relief operations in rain-affected villages, a civic official said.

Elsewhere in the state, 13 people lost their lives in various rain-related incidents in Satara, while 10 Covid-19 patients, who were on ventilators, died after power supply was snapped due to flooding. Deaths were reported from the Vidarbha region as well.

Flood alert has been sounded in Telangana’s Bhadradri-Kothagudem district as Godavari is full spate. In Andhra, the flood level at Polavaram is expected to be 33 metres in the next 24 hours. Authorities issued flood alert following heavy rains in the catchment areas of Krishna and Godavari in Maharashtra, Karnataka, and Telangana.

Eleven districts of Bihar, which has been battling severe floods for the one past month, have turned into waterland disrupting the normal lives of people.

One person died and around 1,000 homes were damaged in Goa, which is facing one of the worst floods in 40 years.

Eight more NDRF teams have been rushed to Maharashtra in addition to the 18 teams already deployed, officials said. Ratnagiri, Raigad and Kolhapur are the worst hit.

Half of Chiplun town down under

Over half of the coastal town of Chiplun in Ratnagiri district, having a population of over 70,000, has been submerged in flood waters. Navy has been requested to help in Ratnagiri.