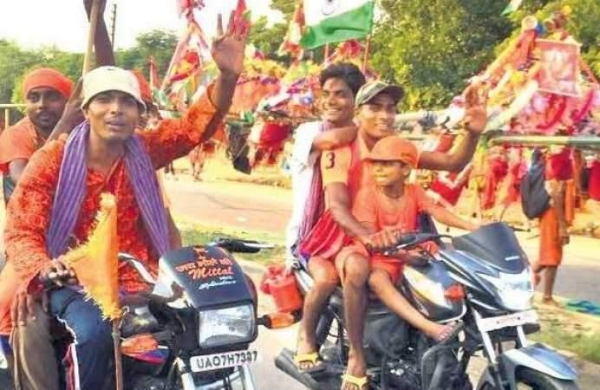 By PTI
DEOGHAR/RANCHI: Eastern India’s one of the biggest religious congregations – the month-long shravani mela at Deoghar and kanwar yatra attached to it- stand cancelled for the second consecutive time this year amid COVID-19 pandemic due to which visit to religious places has been prohibited, officials said on Wednesday.

The month of shravan begins from July 25 this year and to stop devotees from coming to the temple and prevent gathering of kanwarias at the famous Baba Baidyanath temple at Deoghar, considered one of the 12 Jyotirlingas, the district administration has erected five check posts,officials said.

“Shravani mela has been cancelled this year in view of COVID-19 pandemic. Arrangements are being done for online virtual darshan of Baba Baidyanath during Shravan,” Deputy Commissioner Deoghar Manjunath Bhajantri said.

After Uttrakhand, Uttar Pradesh and Delhi, Jharkhand is the latest to call off kanwar yatra by devotees in view of the pandemic.

A delegation of various religious bodies including the President of Panda Dharmarakshini Sabha, members and representatives of Teerth-Priests Society met the Deputy Commissioner,Additional Collector, Deoghar Chadra Bhushan Prasad Singh and they were told about the decision.

The administration has made checkposts at five entry points – Andhrigather, Dardmara, Khoripanan, Jaipur More and Jamua to prevent entry of devotees for ‘jalabhishek’.

The officials said wide publicity is being done through railway officials and others to spread the message that devotees are prohibited inside temple and ‘jalarpan’ (offering water) is not allowed.

Officials have also been asked to barricade the areas around the temple to prevent assembling of crowd.

Prior to COVID-19 the mega event used to be frequented by lakhs of devotees across the country who used to turn-up to offer prayer to Lord Shiva at Baidyanath temple.

The Jharkhand government had on June 30 extended the coronavirus lockdown-like restrictions for the eighth time till further orders with a provision that “all religious places/places of worship are permitted to open but visitors are prohibited”.

” Each year, during the rainy season, devotees in many states undertake kanwar yatra to collect water from the Ganga and other rivers and offer it at the temples of Lord Shiva in major pilgrim centres.

Kanwarias in the eastern region undertake a 100-km trek carrying ganga water from Sultanganj in Bihar to offer it to lord Shiva at the Deoghar temple.

The Jharkhand government this year had hold back permission for the Ratha Yatra festival at the Jagannath temple in Ranchi The latest order of the Jharkhand disaster management department mentions, “All indoor and outdoor congregation of more than 50 persons are prohibited in the state including marriage and last rites related activities.

“Besides, all processions are prohibited in the state. All fairs and exhibitions are banned till further orders”.