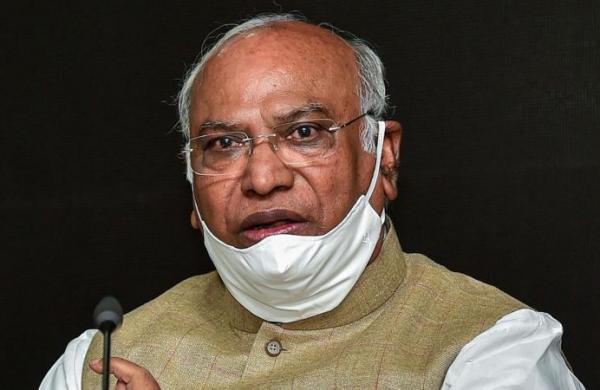 By PTI
NEW DELHI: Leader of Opposition in Rajya Sabha Mallikarjuna Kharge said on Tuesday that the government’s COVID-19 death toll figure of 4-5 lakh is “false” and conservative and claimed the average number of deaths cannot be less than 52.4 lakh so far in the country.

Participating in a short duration discussion on COVID-19 management in the Upper House, the Congress leader alleged that Prime Minister Narendra Modi “failed” in tackling the pandemic and made former health minister Harsh Vardhan a scapegoat for the “mismanagement” of the health crisis.

The Congress is ready to cooperate with the government in a crisis of this nature and save the people from suffering, even as the PM has not yet responded to three letters written by the party with various suggestions to address the pandemic, he added.

The short duration discussion was on the management of COVID-19, implementation of vaccination policy and challenges of the likely third wave. The time allocated for the debate was four hours.

“The government is releasing fake figures (of COVID-19 death toll) and it is far away from the truth,” Kharge alleged in the Upper House. There are about 6,38,565 lakh villages in the country.

“On an average, it comes to 52.43 lakh deaths. It cannot be less than this. Still, they (government) say it is only 4-5 lakh. They keep saying this,” Kharge added.

As Kharge’s remarks drew angry protests from the treasury benches, senior Congress leader Anand Sharma asked them to listen patiently and allow the debate to take place in the right manner.

Leader of the House and Union Minister Piyush Goyal urged members not to engage in criticising each other, and instead raise the level of the debate to find solutions for addressing the likely third COVID-19 wave.

Continuing the debate, Kharge said while the death toll was definitely higher than the government’s estimate, the scenes of bodies thrown in river Ganga depict the kind of suffering people went through during the pandemic.

“The government failed to tackle the pandemic,” the LoP said, pointing out that it imposed a sudden lockdown in 2020 that affected migrants, impacted the economy and “created unemployment and the problem of inflation.

There was a shortage of beds, ventilators and oxygen but still the government is saying it has successfully managed the situation, he said on the second wave.

While other countries were preparing for tackling the second wave, the Modi government was holding elections violating its own COVID-19 protocols, he said.

Kharge said the PM rather than taking the responsibility for mismanagement made the former Health Minister “a scapegoat for the mismanagement” of the COVID-19.

“On every issue, the PM does not take responsibility. He makes others a scapegoat,” he alleged, adding that the prime minister asked the people to follow campaigns like lighting ‘diyas’, but in return, he “cheated” them.

The Congress wrote three letters to the prime minister with various suggestions to tackle the pandemic but no reply came from him, he added.

Kharge, however, said in times of crisis of this nature, the Congress will cooperate with the government and save the lives of the people.

Earlier before his speech, Kharge said he felt “hurt and insulted” because his right to debate was snatched away when few members took the entire House for ransom, a reference to a protest by YSR Congress members.

“You should have created a ground for that. But few people took the entire house for ransom with the same issues which were there three years back. But the government could have solved that. Anyway, I feel hurt and it should not happen in the future to other members,” he said.

YSR Congress members were protesting demanding special status for Andhra Pradesh and had forced a 15-minute adjournment when the short duration discussion was to be taken up at 1300 hours. Since the House was not in order, Kharge could not initiate the debate.

But the Chair called other members to speak and Swapandas Gupta (nominated) shared his views on the pandemic.

India recorded 30,093 new coronavirus infections in a day, the lowest in 125 days, taking the total tally of COVID-19 cases to 3,11,74,322, according to the Union Health Ministry data updated on Tuesday.