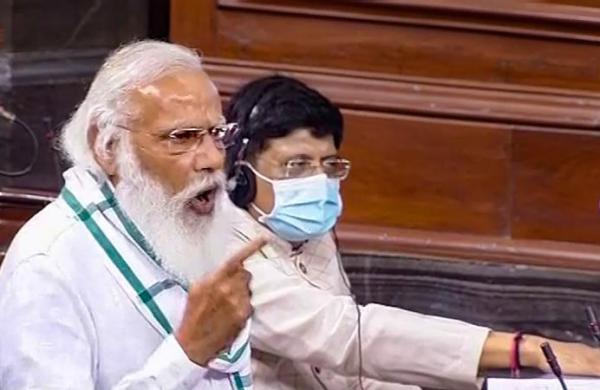 By PTI
NEW DELHI: Prime Minister Narendra Modi on Monday lashed out at the Opposition for creating a ruckus and preventing him from introducing newly- inducted Union ministers in Lok Sabha and Rajya Sabha, saying such a “negative mindset” has never been seen in Parliament.

As the Prime Minister rose in Lok Sabha to introduce the new ministers, Opposition members created an uproar by raising slogans.

Dismayed over the disruption, Modi said, it should make everyone proud that several women, many people belonging to the SC and ST community have taken oath as ministers.

“It seems some people cannot digest that more women, SC, ST and OBC community members are becoming ministers”, Modi said, and noted that several new ministers are children of farmers and also belong to OBC communities, In Rajya Sabha also, the Prime Minister could not introduce the newly-inducted ministers as several slogan-shouting opposition members trooped into the well of the House to protest over various issues.

The Prime Minister slammed the Opposition over it, echoing the views expressed by him in Lok Sabha.

“Such a negative mindset has never been seen in Parliament,” Modi said in Rajya Sabha.

Earlier, addressing reporters ahead of the start of the Monsoon session, the Prime Minster said the Opposition should ask the sharpest and toughest of questions in Parliament but asserted that the government should also be allowed to respond to them in a cordial environment.

The Prime minister’s appeal comes at a time when the Opposition is raring to corner the ruling dispensation over a host of issues, including handling of the second wave of COVID-19, rise in fuel prices, farmers’ stir and an international media consortium report which has claimed that over 300 verified mobile phone numbers, including that of two serving ministers, could have been targeted for hacking through an Israeli spyware.

Modi said he wants meaningful discussions in Parliament over the COVID pandemic which has gripped the entire world.

The Prime Minister said he has requested all the floor leaders to take some time out on Tuesday evening when he would like to give detailed information regarding the pandemic.

“We want a discussion in the House as well as outside the House with all the floor leaders. I am constantly meeting the chief ministers and all kinds of discussions are happening in different forums. So I also want to meet the floor leaders as House is going on and it will be convenient and we can talk about it (the pandemic) face-to-face,” he said.

Hoping that the session is productive and dedicated to meaningful discussions, Modi said the government is fully prepared to give the answers that the people of the country want.

“I urge all MPs and political parties to ask the toughest and sharpest of questions but they should also allow the government to respond in a cordial environment as democracy is strengthened by conveying the truth to the people,” Modi said adding that this enhances the trust of the people and improves the pace of development.

Talking about the vaccination programme going on in the country, Modi said it was moving forward at a fast pace and also urged MPs to cooperate in following all COVID protocols.

“Vaccine is given in ‘baahu’ (arms), and those who take it become ‘Baahubali’. The only way to become Baahubali to fight against coronavirus is to get vaccinated,” Modi said.

Over 40 crore people have become ‘Baahubali’ in the fight against coronavirus, the prime minister said the inoculation programme is being taken forward rapidly. Noting that the pandemic has engulfed the whole world, Modi said he wants that there should be a meaningful discussion regarding the pandemic on high priority.

All practical suggestions given by MPs can usher in newness in the fight against the pandemic, if there are some shortcomings, they can be rectified, and everyone can move forward together in this fight, he added.*