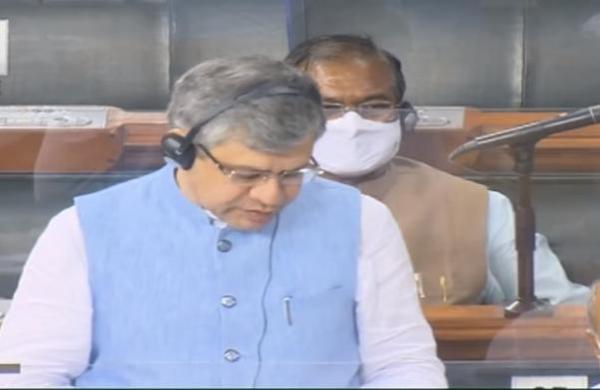 By PTI
NEW DELHI: The government on Monday categorically rejected in Lok Sabha allegations of snooping on politicians, journalists and others using Pegasus software, asserting that illegal surveillance was not possible with checks and balances in the country’s laws, and alleged that attempts were being made to malign Indian democracy.

As a massive row erupted over the issue, IT Minister Ashwini Vaishnaw, in a suo motu statement in the lower house, said the media reports on alleged snooping published a day before the start of the Monsoon Session of Parliament “cannot be a coincidence” and stressed that there is “no substance” behind the sensationalism.

“The press reports of 18th July 2021 also appear to be an attempt to malign the Indian democracy and its well-established institutions,” Vaishnaw said in his first statement in Parliament as a minister.

The opposition parties on Monday hit out at the government over the phone-hacking charge and demanded an independent judicial or parliamentary committee probe.

MPs protested on this issue, besides others, in both Houses of Parliament, leading to several adjournments.

The minister, however, did not specify whether the Indian government was using Pegasus spyware developed by Israeli company NSO.

Media reports claimed that spyware Pegasus was used to conduct surveillance on about 300 Indians, including ministers, political leaders, government officials and journalists.

The minister said many “over the top” allegations have been around the highly sensational story published by a web portal last night.

“The press reports have appeared a day before the Monsoon Session of the Parliament.

This cannot be a coincidence.

In the past, similar claims were made regarding the use of Pegasus on Whatsapp,” he said.

Those reports, he said, had no factual basis and were categorically denied by all parties, including in the Supreme Court.

Speaking amid a din, he said the basis of the media report is that there is a consortium that has got access to a leaked data of 50,000 phone numbers and the allegation is that the individuals linked to these phone numbers were being spied upon.

The report, the minister said, had also observed that the presence of a phone number in the data does not reveal whether a device was infected with Pegasus or subject to an attempted hack.

He further said that the report had also pointed out that the “presence of a number in the list does not amount to snooping”.

The NSO, the company which owns the technology, has also “clearly rubbished the claims in the report”, the minister stressed.

The NSO had said that the list of countries shown using Pegasus in the report was incorrect and many countries mentioned were not even the clients of the company, he added.

India, the minister said, has an “established protocol when it comes to surveillance.

any form of illegal surveillance is not possible with the checks and balances in our laws and our robust institutions.

” A lawful interception of electronic communication, he said, is carried out for the purpose of national security, particularly in a public emergency or in the interest of public safety by agencies at the Centre and in states.

The requests for the lawful interception of electronic communication are made as per relevant rules under the provisions of section 5(2) of Indian Telegraph Act,1885 and section 69 of the Information Technology Act, 2000, the minister said.

Each case of interception or monitoring is approved by the competent authority and there is an established oversight mechanism in the form of a review committee headed by the Union Cabinet Secretary.

In the case of state governments, such cases are reviewed by a committee headed by the chief secretary concerned.

Also, the law also provides an adjudication process for those adversely affected by any incident.

“The procedure, therefore, ensures that any interception or monitoring of any information is done as per the due process of law.

The framework and institutions have withstood the test of time,” the Minister said.

Looking from the prism of logic, “it clearly emerges there is no substance whatsoever behind this sensationalism”, Vaishnaw said.

More than 300 verified mobile phone numbers, including of two serving ministers, over 40 journalists, three opposition leaders and one sitting judge besides scores of business persons and activists in India could have been targeted for hacking through the Israeli spyware sold only to the government agencies, an international media consortium reported on Sunday.

The government, however, had dismissed the allegation of any kind of surveillance on its part on specific people, saying there is “no concrete basis or truth associated with it whatsoever”.