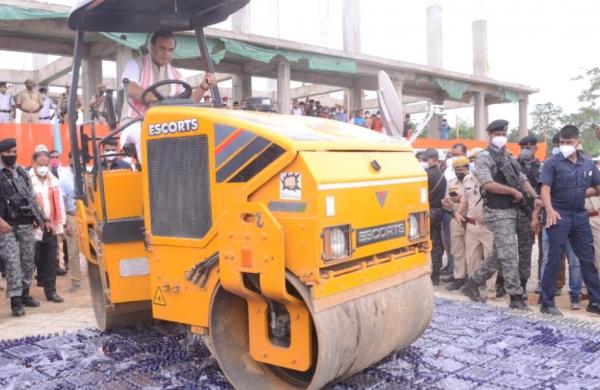 “The Last Rites of Drugs in Assam! In ‘seized drugs disposal’ program at Hojai today, 353.62 grams heroin, 736.73 kg ganja and 45,843 tablets have been destroyed,”Sarma tweeted after taking part in the last of four such programmes in the past two days.

Speaking at Barhampur, he said the state government had adopted a zero tolerance policy against drugs and the police had been asked to aggressively step up measures against the menace. “I appreciate the relentless efforts of the police against drugs. We shall continue to work together against the scourge,” he said.

The CM said destroying seized drugs, worth Rs 163.58 crore over the last two days, spoke volumes of how big this illegal trade is. “It involves evasion of GST and is a severe dent to economy. We’re working in coordination with Manipur and Mizoram to eliminate the menace,” Sarma said.

He made it clear that the state would not be allowed to be used as a transit route for the psychotropic substances. DGP Bhaskar Jyoti Mahanta said the contraband was disposed of by following all procedures. He warned that the police would not spare those dealing in drugs. “We arrested 20 ‘repeat offenders’. They were found committing the crime for the second time and are now behind bars,” Mahanta said.

Giving an example of how alarming the situation is in Nagaon district, he said 1.5 lakh of its 20 lakh population is addicted to drugs. “The society has to be aware of the menace. The drug addicts are patients and we have to treat and reform them,” Mahanta added.