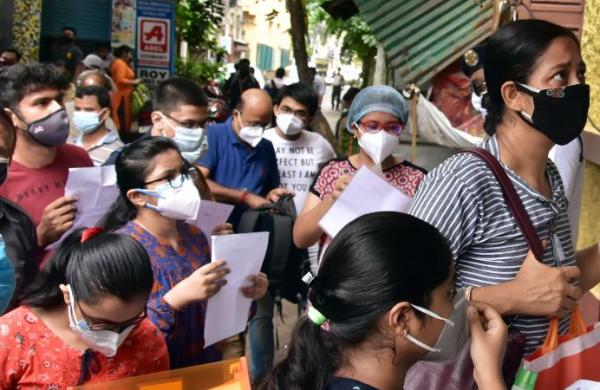 By PTI
KOLKATA: A total of 92,695 candidates sat for the West Bengal Joint Entrance Examination (WBJEE) at 274 centres on Saturday, as the first offline public examination held in the state this year amid the pandemic situation went off smoothly.

An official of the West Bengal JEE Board said that the candidates wrote Mathematics and Physics-Chemistry papers in two halves, with strict adherence to COVID-19 protocols such as wearing masks and maintaining a five-feet distance between them.

“Two candidates were seated on long benches with a five-feet distance between them, and one on the shorter ones. The number of examinees in each room did not exceed 28,” he said.

The Mathematics paper in the first half and the Physics-Chemistry paper in the second were of two hours each and the exams passed off smoothly, the official said.

WBJEE is conducted to shortlist candidates aspiring to study in engineering colleges in the state.

Examinees were allowed to board staff-special trains if they carried admit cards with them.

However, many of them claimed that the number of public transport vehicles at Sealdah, Howrah and Kolkata terminal railway stations were fewer, and they had to shell out a huge amount of money to reach the examination venues on time.

A social organisation pressed into service a few buses, hired from private operators, to ferry candidates for free in Kolkata and Howrah.

The COVID positivity rate in West Bengal has declined to 1.54 per cent, as 14,191 patients of the 15.13-lakh tally are undergoing treatment, while 17,944 people have succumbed to the infection, and 14.81 lakh have recovered from the disease thus far.