Opposition flays filing of sedition case against over 100 Haryana farmers 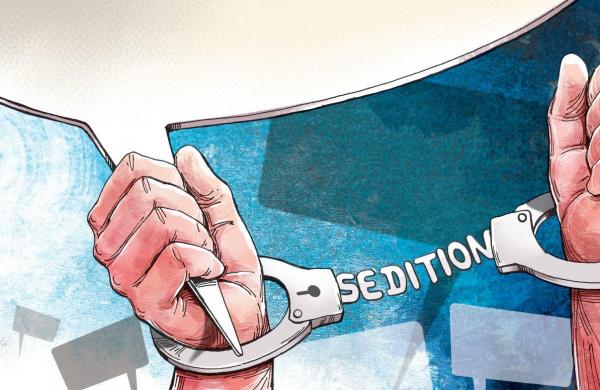 Express News Service
CHANDIGARH:  Leaders of various political parties condemned the action of Haryana Police which registered sedition case against around 100 people who had allegedly attacked the car of Haryana Deputy Speaker Ranbir Gangwa during a protest against the Centre’s contentious farm laws.

The police have arrested five people in connection with the incident which took place on Sunday when the farmers were protesting outside Chaudhary Devi Lal University at Sirsa. As Gangwa came out of the university after attending a function, the farmers allegedly attacked his car and pelted stones, said police sources.

Trinamool Congress MP Mahua Moitra said, “Ironic that Haryana Police charge over 100 farmers with sedition after alleged attack on BJP leader’s vehicle while SC questions why we have this outdated law!” On the Supreme Court asking the Centre whether it was necessary to keep the sedition law in the statute books, Swaraj India president Yogendra Yadav said: “Yes, that’s the question. Case in point: Yesterday, sedition case was registered against farmers in Sirsa for breaking the windshield of a minister’s vehicle!” That’s what this law is being used for, he alleged.

Former law minister Ashwani Kumar did not directly comment on the Supreme Court’s observation but tweeted that the sedition charge against Haryana farmers is an insult to India’s democratic traditions. “Government should withdraw the charges immediately and unconditionally,” he said. Sources said the police have arrested five people after scrutinising video footage of the incident.

This is the first sedition case registered by Haryana Police against the farmers during the ongoing agitation which started in the last year. The police have booked farm leaders Harcharan Singh and Prahlad Singh besides 100 unidentified people on sedition charges. Taking a serious view of the incident, the state government has transferred Sirsa police superintendent. Haryana Home Minister Anil Vij had earlier said, “The violent agitation cannot be allowed to continue in a democratic and peaceful country.’’