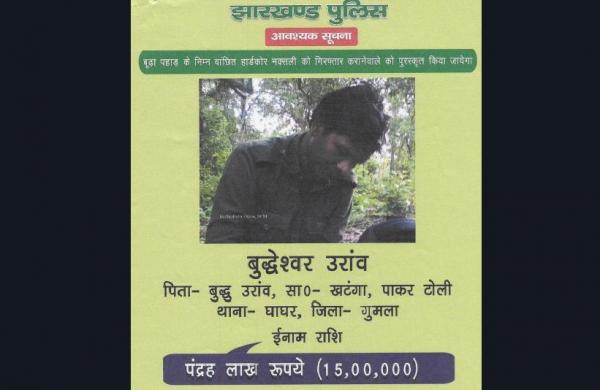 By Express News Service
RANCHI: Wanted Maoist Regional Committee Member and Secretary of Koyal- Shank Zone Buddheshwar Oraon, one of the masterminds behind planting IEDs to prevent police from entering into Marwa jungles of Gumla, was finally killed in an encounter with security forces early in the morning on Thursday.

According to police sources, a joint team of CRPF and state police were on a search operation during which, they had an encounter with the Maoist leaving one of them dead.

“Later, it was found that the dead Maoist was none other than Buddheshwar Oroan, who had been wanted in many cases related to Maoist incidents taking place in the region,’ said IG (Operations) and Jharkhand Police Spokesperson AV Homkar. One AK-47 Rifle along with live ammunition, two magazines, IED detonators, Maoist literature and medicines, and several articles of day-to-day use was recovered from the spot, he added.

The search operation, according to Homkar, was being conducted over strong inputs received from various sources about the presence of CPI (Maoists) in the forests and that they were planning something big.

According to an official release, it is considered a big achievement for police and CRPF as Oraon was a terror in the entire area. At least 14 villagers sustained serious injuries while five others died in the last few years following the blasts taking place due to the IEDs planted by Oraon, it added.

Oraon was named in 103 cases of murder, attempt to murder, rioting, extortion, and robbery registered in different police stations in Gumla (81), Simdega (16), Lohardaga (4), and Garhwa (2). He had a bounty of Rs 15 lakh on his head.

Buddeshwar, hailing from Gabda Khatanga Pakartoli in Gumla, had become a challenge for the Police for quite some time as he succeeded in escaping in more than a dozen encounters taking place with security forces.

Notably, squads of Maoist Zonal Commander Budheshwar Oraon and Ravindra Ganjhu have planted several IEDs in Marwa jungles of Gumla to prevent police from entering into the jungles which often blows off accidentally when the security forces are on search operation or when villagers go into the jungles to graze their animals.

At least 6 incidents of IED blasts have taken place in the Marwa jungles of Gumla killing a villager and a sniffer dog in the last two days. Earlier in February this year also, one CRPF jawan had lost both his legs in an IED blast while a villager Mahender Mahto also got seriously injured in another blast that occurred in Marwa Karagani jungles under Kurumgarh police station in Gumla.