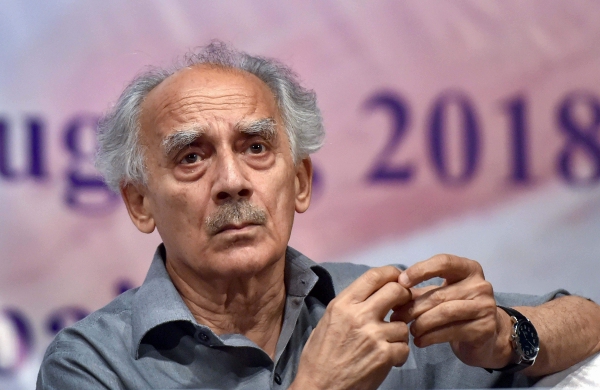 By PTI
NEW DELHI: Former Union minister Arun Shourie on Thursday moved the Supreme Court seeking that the sedition law be declared unconstitutional as it has come to be “heavily abused” and cases are being filed against citizens for “exercising their freedom of speech and expression”.

Significantly, the petition was filed on the day when a bench headed by Chief Justice N V Ramana expressed concern over “enormous misuse” of the law and asked the Centre why it was not repealing the provision used by the British to “silence” people like Mahatma Gandhi to suppress freedom movement.

The bench agreed to examine the pleas filed by Editors Guild of India and a former major general, challenging the constitutionality of the law, and said its main concern was the “misuse of law”.

The Section 124-A (sedition) under the IPC is non-bailable provision and it makes any speech or expression that “brings or attempts to bring into hatred or contempt or excites or attempts to excite disaffection towards the Government established by law in India” a criminal offence punishable with imprisonment up to three years to a life term and fine.

Shourie’s petition claimed that “the definition of sedition (Section 124-A of IPC) was vague and incapable of accurate appreciation by the common citizen and the law enforcement agencies/ police”.

The petition, filed by advocate Prashant Bhushan on behalf of Shourie and NGO Common Cause, claimed that sedition was a colonial law which was used expressly to suppress dissent by the British in India.

“Sedition has come to be heavily abused with cases being filed against citizens for exercising their freedom of speech and expression on the basis of the literal definition that is available to law enforcement authorities on the statute books,” it said.

The petition said that the interpretation accorded to Section 124-A of Indian Penal Code, by the Supreme Court in ‘Kedar Nath Singh vs State of Bihar’ matter in 1962 was not understood or appreciated by the police which continues to register cases against citizens who are exercising their right to freedom of speech and expression”.

“By the time the courts step in to apply the interpretation of Kedar Nath to the facts of the cases, the citizens have already been deprived of their liberty,” the petition said.

It added that after India became a democracy, this law was challenged as being violative of fundamental right to freedom of speech and expression guaranteed by Article 19(1)(a) of the Constitution of India in Kedar Nath Singh v State of Bihar matter in 1962.

Even though the provision was upheld by the Supreme Court in 1962, the position of law has hence changed and the matter requires reconsideration, it said.

“In such circumstances, it is submitted that this court needs to revisit the judgment of Kedar Nath Singh v State of Bihar, and strike down Section 124 A of Indian Penal Code, as being violative of Articles 14 (equality before the law), 19(1)(a) (freedom of speech and expression) and 21 (protection of life and personal liberty) of the Constitution of India,” the petition said.

It sought a direction “declaring Section 124-A of the Indian Penal Code as unconstitutional”.

“Alternatively, direct that strict action as per law be taken against concerned public servants and complainant/ informants in cases where the accused is discharged in a case of sedition and lay down guidelines for the same,” it said.

Several Opposition leaders and civil society activists on Thursday hailed the Supreme Court for asking the Centre whether the sedition law was still needed 75 years after Independence and expressed the hope that it would be “thrown out”.

Concerned over the “enormous misuse” of the colonial-era penal law, a Supreme Court bench headed by Chief Justice N V Ramana asked the Centre why it was not repealing the provision used by the British to “silence” people like Mahatma Gandhi to suppress the freedom movement.

The bench, which agreed to examine pleas challenging the constitutionality of section 124A (sedition) in the IPC, also issued notice to the Centre.

“We do not know why the government is not taking a decision. Your government has been getting rid of stale laws,” it said.

Reacting to the Supreme Court terming the sedition law colonial and asking whether it was still needed 75 years after Independence, former Congress chief Rahul Gandhi said, “We welcome this observation by the Supreme Court.”

Some leaders, including Trinamool Congress MP Mahua Moitra and Swaraj India president Yogendra Yadav, pointed out that about 100 farmers in Haryana were charged with sedition, among other charges, in connection with an attack on the state deputy speaker’s car during a farmers’ protest.

Moitra said she was finally hoping “this archaic law misused by GoI will be thrown out”.

“Ironic that Haryana police charge over 100 farmers with sedition after alleged attack on BJP leader’s vehicle while SC questions why we have this outdated law!” the Lok Sabha MP said on Twitter.

On the Supreme Court asking the Centre whether it was necessary to keep the sedition law in the statute books, Yadav said.

“Yes, that’s the question. Case in point: Yesterday, sedition case was registered against farmers in Sirsa for breaking the windshield of a minister’s vehicle!” That’s what this law is being used for, he alleged.

Former law minister Ashwani Kumar did not directly comment on the Supreme Court’s observation but tweeted that the sedition charge against Haryana farmers is an insult to India’s democratic traditions.

“Government should withdraw the charges immediately and unconditionally,” he said.

Activist and lawyer Prashant Bhushan said, “Kudos to the SC & the CJI for standing up to the Govt on the gross misuse of this colonial law of sedition to silence dissent.”

According to Congress leader Jaiveer Shergill, the British used the sedition law to silence Mahatma Gandhi and the BJP is “using it to kill principles of transparency and accountability espoused by Mahatma Gandhi”.

In a tweet, he said, “28% rise per year in registration of sedition cases since 2014 — well thought strategy to kill freedom of speech!” Actor and Shiv Sena leader Urmila Matondkar said, “‘Do we still need it after 75 years of Independence?’ Honorable #SupremeCourt has referred to #Sedition law as ‘Colonial’.”

He added that we want to remove all traces of British rule but won’t give up this terrible law under which our freedom fighters were jailed.

The Supreme Court bench, which also comprised Justices A S Bopanna and Hrishikesh Roy, said, “Mr attorney (general), we want to ask some questions. This is the colonial era law and the same law was used by the British to suppress freedom movement.”

“It was used by British to silence Mahatma Gandhi, Gokhale and others. Is it still necessary to keep this in statute even after 75 years of independence?” it asked.

Observing that the provision on sedition has been put to “enormous misuse”, it also referred to alarming misuse of Section 66 A of the Information Technology Act even after the top court set it aside long back. and observed: “It can be compared to a carpenter, asked to cut a wood, cut the entire forest.”