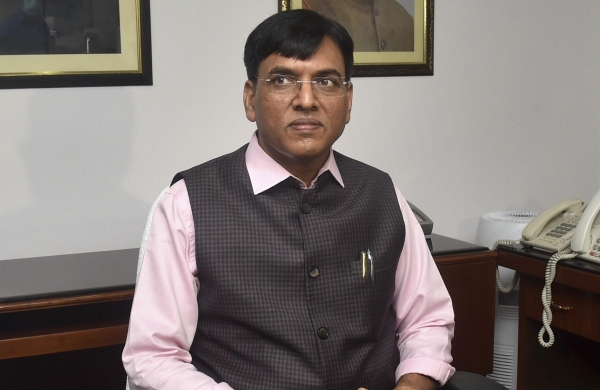 By PTI
NEW DELHI: Amid complains by some states about shortage of COVID-19 vaccines, Union Health Minister Mansukh Mandaviya on Wednesday said “useless”‘ statements are being made only to create panic among the people, and asserted that states know very well when and in what quantity they will get the doses.

The Centre has informed states about the allocation of doses in advance, he said.

In a series of tweets, Mandaviya said the availability of vaccines can be better understood by an “actual analysis of the facts”.

“Regarding the availability of the vaccine, I have come to know from statements and letters of various state governments and leaders. This situation can be better understood by an actual analysis of the facts. Useless statements are being made only to create panic among the people,” he said in a tweet in Hindi.

To enable vaccination through government and private hospitals, Mandaviya said, 11.46 crore vaccine doses were made available to the state governments and union territories in June and this availability has been increased to 13.50 crore in July.

The Centre had informed the states on June 19 about how many doses of the vaccine would be made available to them in July, he said.

On June 27 and July 13, the states were informed about the availability of vaccines every day for the first and second fortnight of July.

“So the states know very well when and in what quantity they will get the vaccine doses. The central government has done this so that the state governments can do the work of vaccination up to the district level by planning properly and people do not face any problem,” he said, “If the Centre is already giving this information in advance on its behalf and yet we see mismanagement and long queues of vaccine takers, then it is very clear what the problem is and who is the reason for it,” he said.

Hitting out at leaders who make statements that create confusion and concern in the media, he said they need to introspect whether they are so far removed from the governance process and related information that they are not even aware of the information already being given in the context of vaccine supply.

Some states like Rajasthan, West Bengal and Maharashtra, which recorded the highest number of COVID-19 cases on Monday, have raised the need for more vaccine doses.

Maharashtra Health Minister Rajesh Tope said the state needed a minimum of three crore vaccine doses per month to inoculate the entire eligible population against coronavirus at the earliest.

COVID-19 inoculation sessions were not conducted in at least 25 of Rajasthan’s 33 districts on Monday due to vaccine shortage, a state official said.

A senior West Bengal health department official also said that the state government was finding it difficult to evenly distribute the doses among its 23 districts.