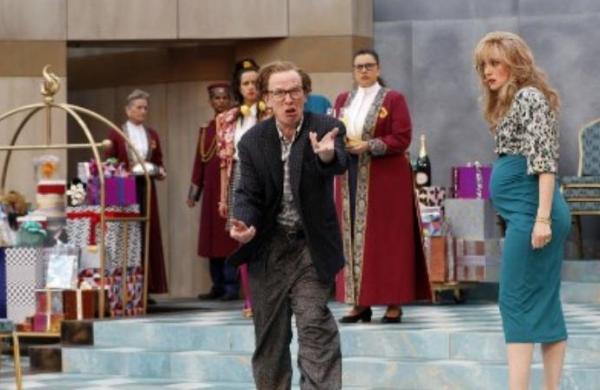 By AFP
STRATFORD-UPON-AVON (United Kingdom): Britain’s Royal Shakespeare Company (RSC) has returned to the stage after an enforced 18-month absence due to the coronavirus pandemic — at a specially built open-air theatre in Stratford-upon-Avon, the bard’s home town.

The first performance of “The Comedy of Errors” took place on Tuesday night, July 13, 2021, in front of a 250-strong crowd — half the capacity until pandemic restrictions are eased in England next week.

“This feels like the real spirit of Shakespeare. You’ve just got the words, the space and the audience,” actor Greg Haiste told AFP before the show.

“And you’ve got that wonderful shared experience which we’ve been missing so much over the last year and a half.”

The purpose-built Garden Theatre in Stratford-upon-Avon, central England, is next to the RSC’s main indoor auditorium on the banks of the river Avon.

It sits on 900 tonnes of rock and 30 tonnes of steel have been used for the seating.

It lies just a stone’s throw from where the celebrated 16th-century playwright was born and his final resting place at the Holy Trinity Church.

The RSC, whose alumni include some of Britain’s most famous actors, from Laurence Olivier to Judi Dench, had been set to perform “The Comedy of Errors” when coronavirus struck.

That forced the company to postpone the farce, as entertainment venues had to shut their doors and stay-at-home restrictions were imposed from March 2020.

“A lot of us started this project in January 2020, and we got right through to almost ready to do it, and we had to pause, and we started again,” said Haiste.

No umbrellas The Garden Theatre has forced the RSC to adapt: lighting — trickier outside — has had to be redesigned, and actors have to use microphones to be heard without indoor acoustics.

“That’s going to be interesting to stay connected with the audience without them directly receiving our voices,” said actress Hedydd Dylan. “Hopefully we’ll get used to it and so will they.”

Dylan is one of the cast members already accustomed to performing in the open as part of productions at London’s Globe Theatre — a reconstruction of Shakespeare’s Elizabethan-era playhouse on the banks of the Thames.

She said she was “used to acting with pigeons landing on the stage sometimes”.

“It’s a little bit distracting but the audience love it. Everything that goes wrong, that’s their favourite game,” she added.

Good weather is never guaranteed in Britain, even in the summer months, and the audience is being warned that they may get wet.

But while raincoats are encouraged, umbrellas are forbidden.

Exposure to the elements, though, is being billed as all part of the experience, giving theatre-goers a taste of how plays used to be performed in Shakespeare’s day.

As well as disruptive pigeons, actors and the audience will have to contend with the surrounding noises of the busy market town or the often noisy nearby swans on the river.

The pandemic has made other changes to preparations.