One dead, 10 missing in landslide and flash floods in Himachal Pradesh 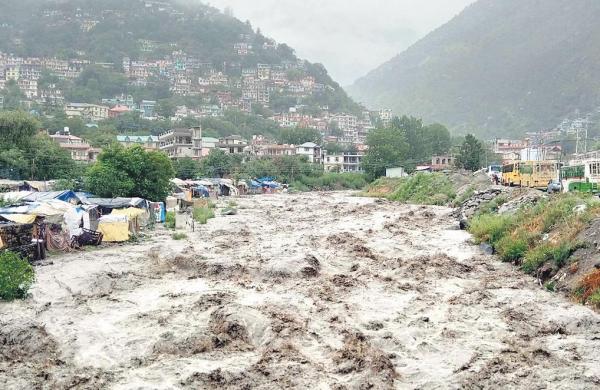 Express News Service
CHANDIGARH: Due to landslide triggered by heavy rains, one woman died and 10 persons are feared missing from the remote and high-altitude village of Boh in Kangra district of Himachal Pradesh. Also, flash flood was reported from Bhagsunag area of Dharamsala, where flood waters swept through the streets and damaged cars of the tourists. Three national highways have been blocked because of this. The Central government has deployed NDRF teams to deal with the situation.

Due to landslide in Boh, some 30 kilometres from Dharamsala, one woman died and ten are missing after debris fell on five to six houses. It is feared that people are  trapped inside those houses. The landslide occurred in the morning, but rescue teams could not reach by the evening, as the road to the area was blocked due to landslides. A few JCB machines had been deployed to clear the road, said sources.A police official said one body has been recovered. An accurate estimate of casualties can be made only after the rescue operation is over.

Due to heavy monsoon rains, most of the rivers flowing from Dhauladhar hills were in full flow, causing flash floods in Bhagsunag area and lower Dharamsala. Due to encroachments on natural drains, the water swept through the streets and many cars parked there were damaged. Three houses and five shops in Bagli area on Dharamsala-Kangra road were damaged. The  road from Sheela to Bagli was also damaged.

Union Home Minister Amit Shah said NDRF teams had been deployed to deal with the situation in Himachal Pradesh. Shah has also spoken to Himachal Chief Minister Jairam Thakur, who expressed concern over the losses due to heavy rains in certain parts of the state. He has directed administrations of various districts to ensure speedy relief and rescue. He urged locals and tourists to refrain from going near the river banks.

Road blockades slow down rescue operationIn Shimla, the national highway near Jhakri in the Rampur area has been blocked due to the heavy downpour. The Chandigarh-Manali and Pathankot-Mandi national highways are also blocked. These blockades have slowed down the rescue process, said officials