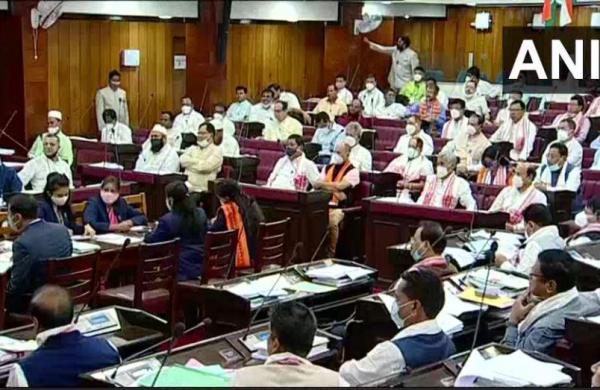 By PTI
GUWAHATI: The entire opposition on Monday staged a walkout on the first day of the Budget Session of the Assam assembly after the speaker refused to allow discussion on the issue of price rise of fuel and other essential commodities.

The Congress, AIUDF and CPI(M) brought three adjournment motions to discuss the issue of rising prices of petrol, diesel, cooking gas and other essential items, but Speaker Biswajit Daimary declined to accept those.

In a rare instance, the speaker, before allowing the respective opposition members to talk on the admissibility of the topic, said that he has decided to cancel the three adjournment motions as the subject is not “under the state government”.

This led to an uproar in the House with the opposition members criticising the speaker for not following the “assembly traditions” to accept the grievances of the non- ruling parties.

“Why is price rise not an issue of the state government? It affects all the people of the state,” Independent MLA Akhil Gogoi said.

On this, Chief Minister Himanta Biswa Sarma asked the opposition that under which rule the speaker should allow discussion on the admissibility of an adjournment motion.

Congress MLA Rakibul Hussain said, “It is the tradition of the House.

And before talking on the admissibility of the topic, how can the speaker cancel the notices even before hearing them?” With no side relenting and the House witnessing a noisy scene, Daimary allowed the opposition to talk on the admissibility of the notices and stated that the matter will be discussed in the next meeting of the Business Advisory Committee of the Assembly.

Moving the motion, Leader of the Opposition Debabrata Saikia said that the prices of petrol and diesel have increased 71 times since January this year on the backdrop of an estimated 2. 5 crore people losing jobs since the COVID-19 pandemic hit the country.

AIUDF’s Aminul Islam said, “It is a definite and urgent matter as required by the Assembly rule to discuss a topic under adjournment motion. Price of every item is rising on daily basis and the poor people are affected due to this.”

CPI(M) MLA Manoranjan Talukdar said huge taxes on petroleum products have been levied by the Assam government and the Centre had earlier asked the states to cut the duties to reduce the prices.

“The state’s policies also affect prices of petrol and diesel. Also, the prices of essential commodities are rising rapidly. The public life has become miserable,” he said.

Presenting the government version, Parliamentary Affairs Minister Pijush Hazarika said the state is not directly involved in the prices of petroleum products.

“As per Rule 57, this topic is not admissible in the Assembly under the adjournment motion. Regarding the price rise of essential commodities, that can be raised through other devices,” he added.

The speaker then turned down the three notices saying that these commodities are not under the control of the state government.

The entire opposition protested the speaker’s decision and came to the Well of the House with placards, which had various slogans regarding price rise of essential items.

“If we are not allowed to talk on price rise, then it is a very very serious issue. It is very wrong,” Gogoi said.

After that, all the opposition members walked out of the House in protest against the Speaker’s decision.