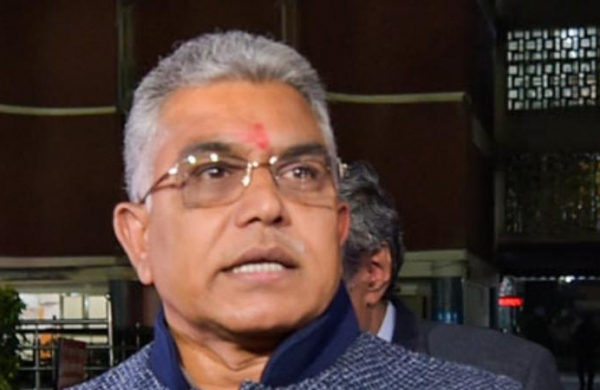 By PTI
NEW DELHI: With several West Bengal BJP leaders airing critical views, state party chief Dilip Ghosh said on Monday that many of these opinions are against the saffron party’s interests, after he met its national president J P Nadda here.

Ghosh told reporters that he apprised Nadda of the political situation in the state and also of the BJP’s affairs there.

MP Saumitra Khan had spoken out after failing to find a place in the recent expansion of the Union Council of Ministers while Babul Supriyo, who was dropped in the exercise, had written on Facebook that he was asked to quit before deleting the statement.

Rajib Banerjee, who had quit the ruling Trinamool Congress to join the BJP, has also been making critical statements after the saffron party lost in the assembly polls.

Without naming the erring leaders, Ghosh said that such statements affect the morale of party workers.

“I have apprised him of the different opinions that have been aired in public, how they spoke without thinking. This dampens the morale of the party workers and should be stopped. The statements which should have expressed internally have been expressed publicly,” said Ghosh.

Speaking further on the leaders who have made out-of-line public statements, Ghosh said that disciplinary action could be taken against them if they continue to make such statements.

The growing discord in the BJP’s Bengal unit came to the fore also when Khan stepped down from the post of the party’s state youth wing chief and took to Facebook to launch a blistering attack on Leader of Opposition Suvendu Adhikari, claiming that he tries to take credit for all achievements.

Later, however, he withdrew his resignation.

“This is against the interests of the party. The party has a disciplinary committee, they will decide. I understand that they must have said this from frustration or for some other reason. However, if there is no change, disciplinary action will be taken,” he said.

On his role as the chief of the party unit in Bengal, Ghosh said that he will continue as long as the party wants him to.

Asked about the induction of four first-times MPs from the state in the Union Council of Ministers, he said the BJP grooms new people by giving them more responsibility.

“It is good for the party in Bengal that we have representatives in the cabinet. I am very happy,” he said.

Ghosh also took a dig at West Bengal Chief Minister Mamata Banerjee, whose party TMC has said that it will unite the opposition parties on the petrol price issue in Parliament and project the CM as a national leader.

“She has tried to be a national leader for many years. Who has heard her? Let her concentrate on Bengal and try and work towards the welfare of the people in the state,” said Ghosh.