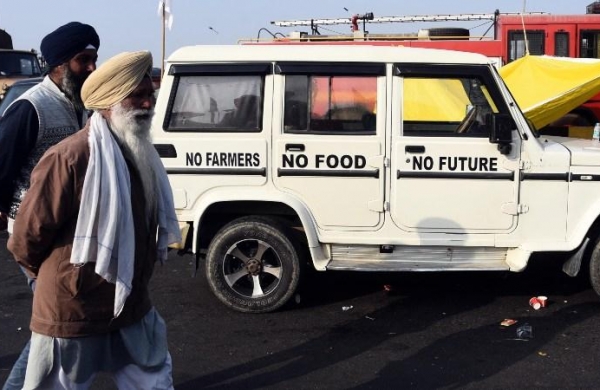 By PTI
NEW DELHI: Convoys of farmers from different parts of Punjab have started their journeys towards Delhi to take part in planned protests outside the Parliament House during the monsoon session, a statement by Samyukt Kisan Morcha (SKM) said on Monday.

“We already announced plans to stage protests during the monsoon session of Parliament starting July 22.”

“Dozens of caravans from different districts including Ludhiana, Sangrur, Mansa, Bathinda, Barnala, Ropar, Fazilka and Faridkot have left already started for Singhu and Tikri Borders,” said the umbrella body of over 40 farmers unions which are agitating since November to press for the scrapping of the three new agri laws and seeking a legal guarantee for Minimum Support Price (MSP).

It also reiterated its intention of sending a warning letter to the opposition parties by July 17 to raise their voice in Parliament for the rights of the farmers.

“Then, every day during the monsoon session of Parliament from July 22 till the end of the session, five members from each farmers’ organisation, totalling at least 200 farmers, will protest outside Parliament,” SKM said.

The government, which has been projecting the laws as major agricultural reforms, has offered to bring amendments but has ruled out their scrapping.

The SKM also said that protests against the BJP leaders were continuing in Punjab.

“Today, a rally was organised against BJP leader Harjeet Grewal at Dhanola of Barnala district.”

“After gathering at Dhanola’s Dana Mandi, the protesters reached Dhanola Bazaar chanting slogans for repeal of the Black Farm Laws and enactment of a law guaranteeing MSP,” the statement said.

The Bharatiya Kisan Union (BKU), an influential farmers’ group in north India, on Monday dissolved its executive councils and cells in Uttar Pradesh.

The BKU’s national executive took the decision in view of an ongoing review of the union, but a revamped UP executive would be formed soon, its media in-charge Dharmendra Malik said.

“All executive councils of BKU in Uttar Pradesh, including the men’s, women’s and youth wing, besides district and zonal cells, have been dissolved,” Malik said in a statement.

Except for BKU’s UP unit president Rajveer Singh Jadaun, all other office bearers of all cells have also been relieved of their charges, he said.

“On the basis of the review in the organisation, all the committees will be formed again soon,” Malik added.

The BKU, led by its president Naresh Tikait, is part of the Samyukta Kisan Morcha, an umbrella body of various farmer unions protesting against the three contentious farm laws at Delhi’s borders since November 2020.

BKU national spokesperson Rakesh Tikait is leading the union’s hundreds of supporters at Ghazipur on the Delhi-UP border for nearly eight months now.