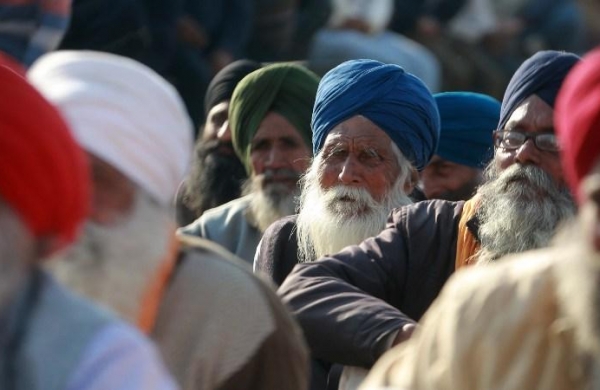 Police said the rear windscreen of the SUV broke as stones were pelted, but no one was hurt.

The day saw protesters gather at various places across the state, raising slogans against the government and demanding a rollback of the contentious farm laws.

Earlier in the day, at one such protest in Fatehabad, protesters removed metal barricades put up by the police as they marched towards a venue where Haryana Cooperation Minister Banwari Lal and Sirsa MP Sunita Duggal were attending a party function.

Duggal later travelled to Sirsa to attend another party event, where Gangwa, a BJP MLA from the Nalwa constituency in Hisar district, was also present.

Farmers carrying black flags had assembled outside the Chaudhary Devi Lal university there during the day and raised slogans against the government.

While the leaders were coming out after the function ended, protesters targeted Gangwa’s car, the police said.

Despite heavy police presence, some managed to surround the vehicle and banged against it with their hands.

“The deputy speaker was seated on the front seat at the time of the incident. The vehicle’s rear windscreen was broken. It is not immediately clear whether something was hurled at it or somebody broke it with hand or an object. Some stones were also pelted at the vehicle as we were trying to escort it out of the area.”

“No one in the vehicle received injury. Later, the deputy speaker was safely escorted out of the area,” Deputy Superintendent of Police, Sirsa, Sanjay Kumar told PTI over phone.

He said Sunita Duggal was in another car when the incident occurred.

Farmer leaders later said many protesters were detained by the police.

They claimed that they were holding a peaceful protest when police personnel forcibly removed them from the site, to which they objected.

Another protest was held in Jhajjar, where farmers assembled when they learnt that state BJP chief O P Dhankar was to attend a party event there later in the day.

With black flags in their hands, the protesters said they would not allow the BJP or its ally JJP to hold functions unless the farm laws are repealed.

In Ambala, a large number of protesters gathered on the Ambala-Saha road when they learnt that the district unit of the BJP was holding a function.

Protesting farmers have been opposing public functions of the BJP and the JJP in the state.

On Saturday, farmers clashed with police when they tried to force their way through barricades towards a venue at Jagadhari in Yamunanagar district where Haryana minister Mool Chand Sharma was to address a meeting.

Protests were also held in Hisar against Haryana BJP chief Dhankar and in Jind against state minister Kamlesh Dhanda.

Speaking to reporters in Punjab’s Gurdaspur on Sunday, Haryana Bharatiya Kisan Union (Chaduni) chief Gurnam Singh Chaduni said it has been more than seven months since farmers started their protest at Delhi’s borders, but the government was not listening to them.

Chaduni led a march of farmers on various vehicles from Dera Baba Nanak in Gurdaspur to the Singhu border protest site.

“This agitation has been going on for several months now, but the Centre is not listening to the farmers. But the BJP-led government is mistaken if it thinks this agitation will die down. In fact, it is gaining more and more strength, and farmers will rest only when these laws are scrapped,” he said.

Farmers, mainly from Punjab, Haryana and western Uttar Pradesh, have been camping at Delhi’s borders for over seven months in protest against three agri laws.