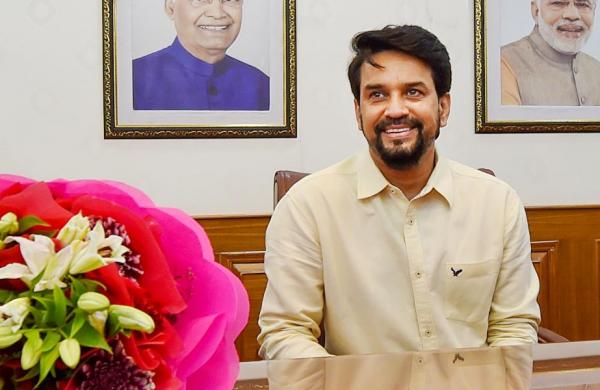 By PTI
NEW DELHI: Several ministers, who took charge after a major Cabinet reshuffle, on Thursday hailed Prime Minister Narendra Modi for his leadership and vowed to realise his vision for the country.

Newly appointed Union ministers and those elevated in the Cabinet reshuffle, including Ashwini Vaishnaw, Anurag Thakur and Mansukh Mandaviya, took charge of their respective ministries on Thursday.

“I thank the honourable prime minister for the great opportunity he has given me to serve the nation. Telecommunications, IT and Railways. There are lots of synergies in the three and I will be working to ensure that his vision is implemented,” Vaishnaw told reporters.

“Excellent work has been done in the railways over the past 67 years. I am here to take the vision of Prime Minister Narendra Modi forward,” he said while taking charge.

Interacting with reporters after assuming charge as the Information and Broadcasting Minister, Thakur said that Prime Minister Modi has given him a huge responsibility and he will make best efforts to fulfil it.

He said reaching out to the masses through the Information and Broadcasting Ministry will be his main area of focus. “Modi ji has done fantastic work in the last seven years. My endeavour will be to meet his expectations, reach out to maximum people and take the legacy of my predecessors forward,” Thakur said.

Late last night, Jyotiraditya Scindia, who was sworn in as a Cabinet minister, thanked Prime Minister Modi, BJP chief JP Nadda and the party leadership for entrusting him with the responsibility to serve as Civil Aviation Minister. “Looking forward to working under the guidance and vision of the PM to build a strong aviation sector for Aatmanirbhar Bharat!” Scindia tweeted.

Bhupender Yadav, who assumed charge of the Ministry of Environment, Forests and Climate Change and as the Labour Minister, said, “I am grateful to the prime minister. I have already taken charge as labour minister. Now I take charge as environment minister. I will put my best foot forward to fulfil the responsibility given to me by the PM and the confidence he has shown in me.”

Subhas Sarkar, who took charge as the new Minister of State for Education, expressed his commitment to devote himself to fulfil the vision of the prime minister.

Bureaucrat-turned politician Raj Kumar Singh, who assumed charge as the Minister of Power and New and Renewable Energy, expressed gratitude to Modi for giving him the responsibility, and said the prime minister has shown great confidence and “we will live up to that”.

In his brief interaction with the media after assuming charge, Singh said, “We have achieved targets of electrification set by the prime minister well before the schedule and will strive to ensure that the benefits of power and energy sector reach the common man.

Apart from 15 Cabinet ministers, 28 Ministers of State, comprising new faces and those elevated, were sworn in at a ceremony which was held in the Darbar Hall of the Rashtrapati Bhavan.