Major clean up in mega shake-up of Modi’s Cabinet 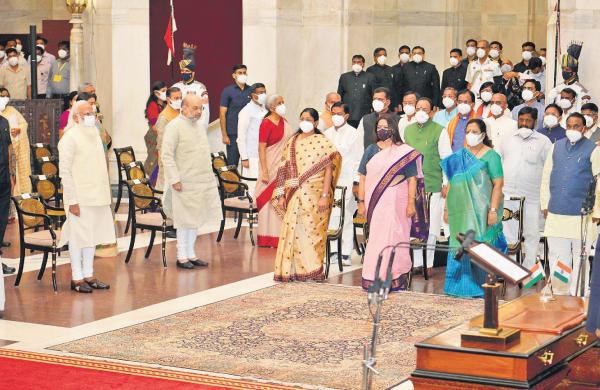 Express News Service
NEW DELHI:  Aiming to do an image makeover and making the party poll ready with ample representation from the weaker sections of the society, Prime Minister Narendra Modi on Wednesday carried out a major shake-up of his council of ministers. The adverse impact of Covid-19 apparently led to the culling of 12 ministers, including biggles like Dr Harsh Vardhan, Ravi Shankar Prasad and Prakash Javadekar.

With the government being hauled over the coals by an aggressive higher judiciary during the Covid second wave, Prasad lost his place in the new Cabinet. The new law minister is Kiren Rijiju, who has been elevated to Cabinet rank.

Javadekar was seen as not having delivered as the first spokesperson of the Centre in his role as minister for information and broadcasting. The new I&B minister is Anurag Thakur, who has also been given Cabinet rank. Vardhan, in the firing line for not anticipating the Covid second wave, lost his health portfolio to Mansukh Mandaviya, who who had been actively arranging medicines for Covid patients.

Others who were elevated to Cabinet rank were Hardeep Puri, G Kishan Reddy, R K Singh and Puroshottam Rupala. In all, 43 ministers took oath of office. The first was Narayan Rane as Cabinet minister, which indicated the party is not looking to win back the Shiv Sena in Maharashtra, and will go it alone in the next Assembly polls while expanding its support base in the Konkan region. He will hold the MSME portfolio.

As expected, former CM of Assam Sarbananda Sonowal and the architect of the BJP government in Madhya Pradesh, Jyotiraditya Scindia got Cabinet rank. Scindia is the new minister for civil aviation. Interestingly, his father Madhavrao Scindia had quit as civil aviation minister in 1992 after an aircraft crash.

BJP’s national general secretary Bhupender Yadav, a key aide of Union home minister Amit Shah, and a protégé of late minister Arun Jaitley, joined the Cabinet. He will hold the environment and labour portfolios. Shah has been given the additional role of running the new ministry of cooperation.

Bureaucrat-turned-politician Ashwini Vaishnaw from Odisha also entered the Cabinet. He had earned his spurs in Vajpayee’s PMO. He is the new minister for information technology and railways. A dozen ministers from the Scheduled Castes were also drafted in, including A Narayanswamy (Karnataka), Kaushal Kishore (UP) and L Murugan (Tamil Nadu). With eight ministers hailing from the tribal community, the BJP clearly sought to work out its social engineering with the SCs, STs and Other Backward Castes (OBCs).

NDA allies who took their oath included R C P Singh (JD-U) and Pashupati Paras (LJP), both Cabinet rank, and Anupriya Patel of Apna Dal as minister of state. With Gujarat polls due next year, Mandaviya and Puroshottam Rupala, both belonging to the Patidar community, were promoted. Reddy’s elevation was in line with the BJP’s aspirations in Telangana. Adding combative leaders, the PM drafted in Shobha Karandlaje (Karnataka) and Meenakshi Lekhi (Delhi), while Bengal was represented by four new faces.

Youngest ever team picked so farWith an average age of 56, the new team is the youngest ever Modi has led so far. The youngest is first time Lok Sabha member from Cooch Behar Nisith Pramanik (35) while the eldest is 69. The other young ministers are Shantanu Thakur (38), Anupriya Patel (40), Bharati Pawar (42) and John Barla (45)

Seven former babus in Modi’s new teamThe new team has 27 members representing the Other Backward Classes, 12 Scheduled Caste and eight Scheduled Tribe ministers. It also has a Muslim, Christian and Sikh each and two Buddhists. As for professionals, it has three lawyers, six doctors, five engineers and seven former civil servants

All you want to know about ministers

Narayan raneFirst-time Rajya Sabha MP from Maharashtra; six-time MLA and CM for a few months in 1999. Expelled from Shiv Sena in 2005; joined Congress; formed own outfit in 2017 which then merged with BJP

Sarbananda sonowalA law graduate, he was CM of Assam from 2016-2021; two-time Lok Sabha MP; was minister of state (independent charge) in the Modi government earlier; has been an MLA twice; seen as a major figure

Virendra KumarMP from Tikamgarh in Madhya Pradesh; elected to Lok Sabha seven times; a PhD in child labour, he has served as MoS for Women & Child Development and Minority Affairs in the Modi govt in the past

Ram chandra Prasad SinghAn alumnus of Jawaharlal Nehru University and a retired IAS officer of 1984 batch, he is a Rajya Sabha MP from Bihar; is the president of Janata Dal-United and Chief Minister Nitish Kumar’s close confidante

Pashupati ParasA Lok Sabha MP from Hajipur in Bihar and brother of the late Ram Vilas Paswan; has been a 7-time MLA; is heading the breakaway faction of LJP following the recent coup against nephew Chirag Paswan

Kiren RijijuA prominent leader of BJP from Northeast (Arunachal); gets a promotion with Cabinet rank; was minister of state for sports and youth affairs earlier; was MoS Home in Modi government’s first term

Hardeep Singh Puri Is Rajya Sabha MP; was a 1974 batch IFS officer and one of India’s top diplomats who held several key positions such as Permanent Represen-tative to UN; was earlier minister for civil aviation, housing and urban affairs

Mansukh MandaviyaRajya Sabha MP from Gujarat; was minister of state for port & shipping and chemical & fertilisers; started his political career as member of the BJP’s youth wing; became the youngest MLA in Gujarat in 2002

Parshottam RupalaA Rajya Sabha MP from Gujarat; was earlier minister of state for agriculture and panchayati raj; is known for his humour and oratory skills; the 66-year-old served as a minister in state earlier

Bhanu Pratap Singh VermaLok Sabha MP from Jalaun in Uttar Pradesh, serving his fifth term in Parliament; in 2001, he became vice-president of the Uttar Pradesh BJP’s SC Morcha and a decade later, he became its president

Shobha KarandlajeLok Sabha MP from Udupi Chikmangalur in Karnataka; was an MLA and MLC earlier; is a close associate of Karnataka Chief Minister BS Yeddiyurappa; was a minister in his cabinet earlier

Anupriya patelPresident of BJP’s ally Apna Dal (S) and Lok Sabha MP from Mirzapur, UP; serving her second term; was earlier MoS-health in the Modi government; was a professor before entering politics

SP Singh baghelLok Sabha member from Agra and serving his fifth term; holds PhD and law degrees; was minister in the Uttar Pradesh government in th past; a prominent SC face in this crucial heartland state; was in SP and  BSP earlier

Darshana Vikram JArdoshA three-time MP from Gujarat’s Surat; was a corporator earlier and member of the Gujarat Social Welfare Board; an OBC face of the party; has served as a member of different committees of Parliament

Annpurna DeviFirst-time MP from Kodarma, Jharkhand; was a four-time MLA and also served as a minister in the states of Jharkhand as well as Bihar; she has done Masters in History from the Ranchi University

A Narayana swamyFirst-time Lok Sabha MP from Chitradurg, Karnataka; was MLA for four terms earlier and minister in the state; SC face of BJP; said to be close to party national general secretary BL Santosh

Ajay BhattMP from Nainital, elected first time to Lok Sabha; was a practising lawyer before joining politics; Brahmin face from Kumaon in Uttarakhand; was three-time MLA and Cabinet minister in the hill state

BL VermaThe 59-year-old is first time Rajya Sabha MP from Uttar Pradesh; hails from Badaun district; is prominent OBC face; became UP BJP vice-president in 2018; is in Parliament Committee on Welfare of OBCs

Ajay Kumar Lok Sabha MP from Khiri constituency in Uttar Pradesh; is the lone Brahmin face from among the ministers appointed from the state; represent Terai region; the 60-year-old former MLA also holds a law degree

Chauhan Devusinh A two-term Lok Sabha member from Kheda in Gujarat; an OBC, was 2-time MLA earlier; prior to his full-time political career, he has served as an Engineer in All-India Radio; holds a diploma in Electrical Engineering

Kapil M PatiLIs Lok Sabha MP from Bhiwandi in Maharashtra, serving his second term; is BJP’s OBC face; shifted to the party from NCP; has been member of standing committee on defence & committee on absence of members from House

Pratima BhoumikFirst-time MP from Tripura West Lok Sabha seat; the 52-year-old BJP leader is from a humble background and holds a graduate degree in Bio-Science; is the first to be made minister from the state in three decades

Subhas SarkarIs a first-term Lok Sabha MP from Bankura in West Bengal; is a gynaecologist and board member of AIIMS Kalyani; has been BJP’s organisation man in the state; was made vice-president of West Bengal BJP in 2013 to 2017

Rajkumar Ranjan SinghIs a first-time MP of the BJP from Inner Manipur Lok Sabha constituency. The 68-year-old Singh was a professor of geography for four decades before becoming a lawmaker; holds MA and PhD degrees

Shantanu ThakurElected to Lok Sabha from Bongaon constituency of West Bengal; is an influential Matua dharma guru; has been actively involved in spreading Matua culture as a leader of All India Matua Mahasangha

Bishweswar TuduIs a Lok Sabha MP from Mayurbhanj in Odisha; hails from the Cuttack region; the 56-year-old holds a Diploma in Electrical Engineering,  worked as an engineer in state water resources dept prior to joining politics

Munjapara MahendrabhaiIs Lok Sabha MP from Surendranagar, Gujarat, serving his 1st term; prior to his political career, he had a 3 decades long career as a Cardiologist and Professor of Medicine in Gujarat; is known to be a social worker at heart

L MuruganPractised law in the Madras High Court for 15 years before joining public life; was Vice Chairman of the National Commission of SCs from 2017 to 2020; he holds a LLM and PhD in Law from Madras University

John BarlaIs a Lok Sabha MP from Alipurduars, West Bengal, serving his first term; he started off as a tea garden worker at the age of 14 and has worked for the rights of tea garden workers for more than two decades

Nisith Pramanik He is a Lok Sabha MP from Cooch Behar constituency in West Bengal, serving his first term as a member of Parliament; the 35-year-old has worked as an Assistant Teacher in a Primary School and has a BCA degree