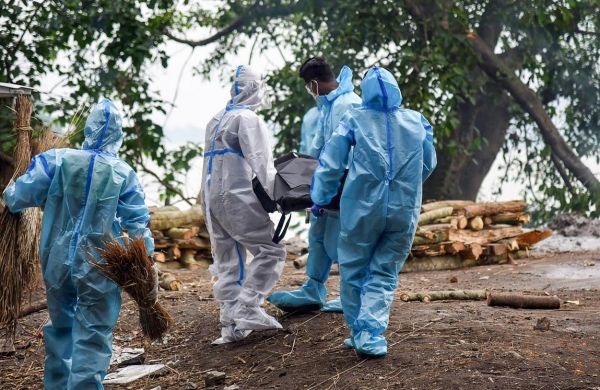 By PTI
UJJAIN: Two persons were found infected with the dreaded ‘Delta plus’ variant of the coronavirus in Ujjain district and one of them, a woman, died on May 23, the local administration said on Wednesday.

‘Delta plus’ has been declared a variant of concern by the Centre.

“A woman died in Patidar Hospital due to coronavirus on May 23 after she tested positive for COVID-19. Her sample and that of 14 others were sent for genome report (sequencing) in a lab in Bhopal,” an official release said.

“Out of these 15 samples, two persons were found infected with the Delta plus variant and among these two, a woman died on May 23 in the private hospital,” it said.

The release did not mention the date on which the genome report was received.

Later, 21 persons, who came in contact with these two patients, were traced and all of them were subjected to RT-PCR test, but none of them was found COVID-19 positive, the release said.

Ujjain collector Ashish Singh said there is no threat of the Delta plus variant in the district, but cautioned people not to lower their guard and follow COVID-19 appropriate behaviour, including wearing a face mask, maintaining social distance and avoiding crowded places, it said.

The release was silent on the status of the second person found infected with the Delta plus variant and efforts to contact officials on the matter proved futile.