IMA doctors protest in Delhi over violence against healthcare professionals 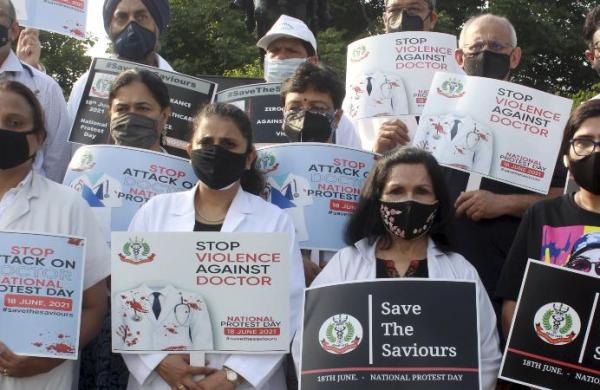 By PTI
NEW DELHI: Several doctors on Friday held protests here as part of a nationwide stir called by the IMA against the recent incidents of violence against healthcare professionals in some parts of the country, and to demand a central law to curb such cases.

FAIMA founder Dr Manish Jangra told reporters that the AIIMS RDA is not part of the protest but members of IMA and FAIMA are leading the protest, and “we will be having a protest at RML Delhi too at 1 PM near the hostel”.

FAIMA lodges its strong protest against the “recent incidents of violence” against doctors, he said. The call for the nationwide protest was issued by the IMA, which on Thursday had said that around 3.5 lakh doctors of the association will participate in it.

The IMA had said in a statement on Thursday that in Bihar and central Kerala, doctors will close their clinics in the morning to press for the demand of a central law against violence against doctors.

In the evening, public interaction has been arranged to form a coordination team in each branch of IMA to stop such violence from taking place.

The Health Services Personnel and Clinical Establishment (Prohibition of Violence and Damage to Property) Bill, 2019, which sought to impose a jail term up to 10 years for assaulting on-duty doctors and other healthcare professionals was opposed by the Home Ministry, saying the special law was not feasible as health is a state subject.

“There are many central health laws such as the PCPNDT Act and the Clinical Establishment Act. Currently, 21 states have local laws, but what we need is a strong central law to protect doctors from violence,” the doctors’ body said.

Cases of violence against doctors and other healthcare workers have been reported lately from some parts of the country, including Jammu and Kashmir and Assam among other places.

On June 1, a doctor at a medical facility in Hojai in Assam was allegedly assaulted by attendants following the death of a patient suffering from COVID and pneumonia at Udali Model Hospital.

The National Human Rights Commission had later taken cognisance of the case and asked the Assam government and the state police chief to inquire into the alleged assault and take “needful, preventive and punitive action” in the case.