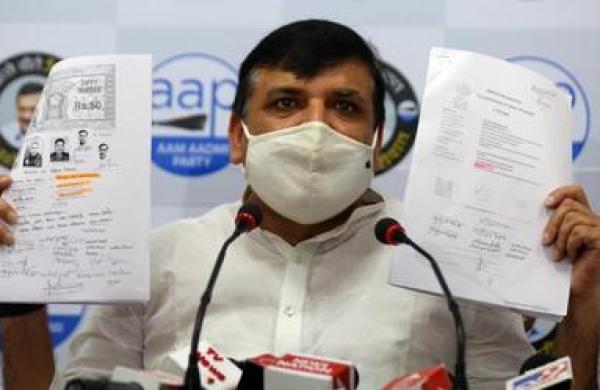 By Express News Service
NEW DELHI: Rajya Sabha MP and Aam Aadmi Party leader Sanjay Singh on Wednesday made fresh allegations against the members of the Ram Janmabhoomi Trust in relation to a land agreement deal. Singh, AAP’s Uttar Pradesh in-charge, alleged that Rs 16.50 crore was looted in the name of the temple of Lord Shri Ram to be built in Ayodhya.

“Instead of taking action against those invovled in the scam and corruption that took place in the name of land in the Ram Janmabhoomi Trust, the entire Bharatiya Janata Party is standing with property dealers,” Singh said on Wednesday.

The Aam Aadmi Party is racking up the issue of alleged land acquisition scam in the building on Ram Temple in the largest states of the country under the administration of Chief Minister Yogi Adityanath.

Reiterating his stand on the issue, Singh said, “No matter how many attacks you (BJP) people plan on me, It will not deter me from bringing out the truth in front of the people who have faith in Lord Ram. Our demand is that the people of BJP and the trust should apologise to crores of Hindus and the temple should be constructed soon after sending the dishonest people to jail.”