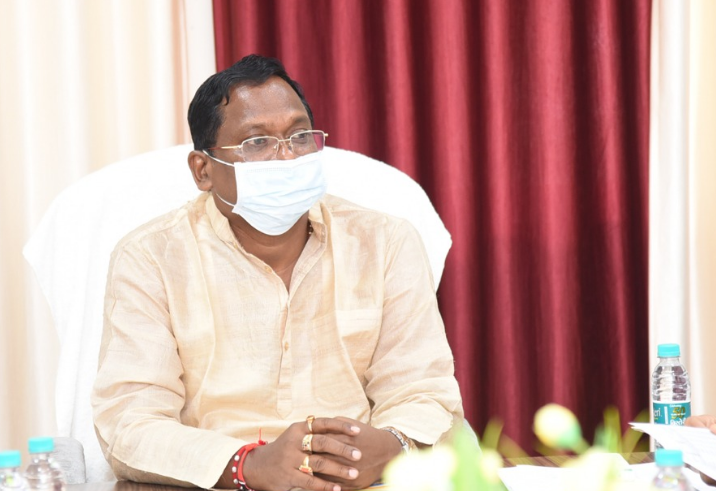 Food Minister Shri Amarjit Bhagat reviewed the working of Food, Civil Supplies and Consumer Protection Department at Mantralaya (Mahanadi Bhawan) today. He directed to make arrangements for distribution of food grains in fair price shops. He did a district-wise review of the storage and distribution of food grains in the government fair price shops of the state. Shri Bhagat has asked to ensure adequate storage for distribution of rice, jaggery, sugar and gram. Instructions have been given to the officers for systematic operation of government fair price shops, drinking water system in ration shops, painting and putting up rate list, as well as to keep constant inspection of PDS.

Food Minister Shri Bhagat has instructed the departmental officers that PDS should be started in the state. Make proper arrangement of bales of good quality for the rice from the gunny bags. Instructions have been given to make adequate storage arrangements for all the unreachable and inaccessible areas before the rainy season. It was informed in the meeting that the Government of India has not yet received the formal order for free food grains to the BPL category ration card holders. Therefore, as per the announcement of Chief Minister Bhupesh Baghel, proper arrangements are being made to distribute the BPL card holders free of cost. The Food Minister has given instructions for proper security of the paddy left uncollected in the paddy collection centers and procurement centers. He has given instructions to the officers to work cautiously so that there is no paddy shortage anywhere. If there is a complaint of paddy shortage anywhere, action will be taken against the concerned officials. The Food Minister has instructed the officers to take necessary action by continuous monitoring and correspondence for the purchase of rice by the Food Corporation of India under the Central Pool. Instructions have been given to the officers to distribute food grains every month to the beneficiaries of PDS as per their eligibility. It was informed in the meeting that out of 92 lakh metric tonnes of paddy purchased in the state this year, about 54 lakh metric tonnes by millers, 20 lakh metric tonnes by collection centers, more than 9 lakh weeders and more than 8 lakh 10 thousand metric tonnes of paddy The lifting has been done by the Food and Civil Supplies Corporation. The Food Minister also reviewed the custom milling of rice last year and this year.
In the meeting, Secretary, Food Department, Mr. Topeshwar informed that CCs in 4 thousand government fair price shops of the state. TV Cameras have been installed, including 109 shops in urban areas and 2 thousand 900 in rural areas. CC in remaining ration shops TV Camera installation is in progress. In the state, about 4 thousand 428 fair price shops are operated by panchayats, more than 4 thousand shops by cooperative societies, 3 thousand 925 shops by women self-help groups, 120 shops by security societies and 320 fair price shops by urban bodies. has been Adequate quantity of food grains, jaggery, gram, sugar, fortified rice are being stored and distributed smoothly in all the shops. Departmental officers including Special Secretary, Food Department Shri Manoj Kumar Soni, MD Markfed, Ms. Kiran Kaushal, MD Nan Shri Niranjan Das were present in the meeting.