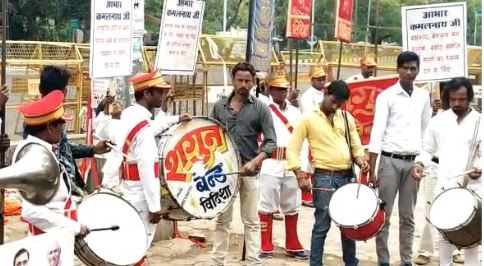 Collector and District Magistrate, Shri Saurabh Kumar, under the order of the Ministry of Home Affairs, Government of India and the guidelines issued in paragraph 4 of the order dated 11 June 2021 of his office, allowed to play Dhumal / Grass Band and Band Party during social programs under Raipur district. Conditional permission granted.

While playing Dhumal / Brass Band and Band Party, all the people involved in it will have to follow all the instructions issued by the Government of India / State Government for the control and prevention of corona virus.

Thermal screening of all the people participating in Dhumal/Brass band and band party players, wearing of masks, using hand sanitizers from time to time, physical distancing and social distancing means that there should be at least two meters/s between persons. It will be mandatory to keep a distance of 06 feet. While playing Dhumal/Brass Band and Band Party, NGT. And the standards set by the government for noise pollution control, the guidelines of the Noise Act, Government of India and the Hon’ble Supreme Court will have to be compulsorily followed.

If the above conditions are found to be violated, then the entire responsibility will be of the manager of Dhumal/Bass Band and Band Party and strict action will be taken as per section 188 of Indian Penal Code 1860 and other relevant law.