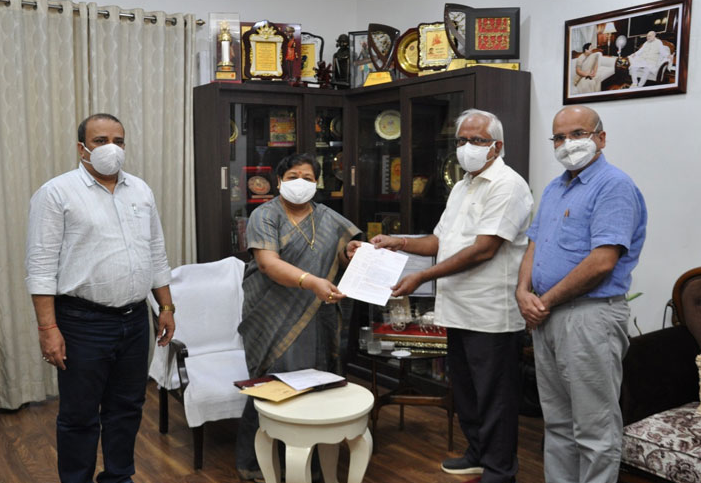 Indian Medical Association delegation met Governor Anusuiya Uikey on Tuesday. A memorandum regarding their demands was submitted to the Governor in Raj Bhavan in protest against the violent activities taking place across the country on doctors and medical workers. In order to protect their rights, to give proper protection to doctors and medical institutions and to provide proper assistance to the families of doctors and medical workers who have lost their lives in this battle of Corona, by giving them martyr status, the Indian Medical Association on Tuesday called for Demand Day. has been declared. In this memorandum regarding their demands was submitted to Prime Minister Narendra Modi, Governor Anusuiya Uikey, Chief Minister Bhupesh Baghel, all MPs, Home Minister Tamradhwaj Sahu, Health Minister TS Singhdev, DGP DM Awasthi and Collector Raipur Saurabh Kumar.

Under this program, the Indian Medical Association has declared National Protest Day on 18 June in protest against the violent incidents with doctors and medical personnel. On this day, all the doctors will work under the Corona protocol, protesting by wearing black masks and black bands in their respective premises.
He has said that the country is battling the Corona epidemic for the last one and a half years. The entire medical community is working hard to save the lives of the people of the country. In this effort, millions of lives have been saved and many families have been saved from becoming orphans. Doctors are also human beings, not God. More than 1,400 doctors and thousands of other medical workers lost their lives in an effort to save the lives of the public. Even due to the demise of many medical couples, their children became orphans.

Doctors and medical workers working as frontline warriors in the war against Corona virus, forgetting their families and keeping their lives on their hands, are facing harassment across the country. Violent attacks took place in many places in which many young doctors as well as many experienced doctors lost their lives. Many doctors are still fighting for life and death in hospitals. Many women doctors are being abused. Many doctors are being talked about in abusive language.