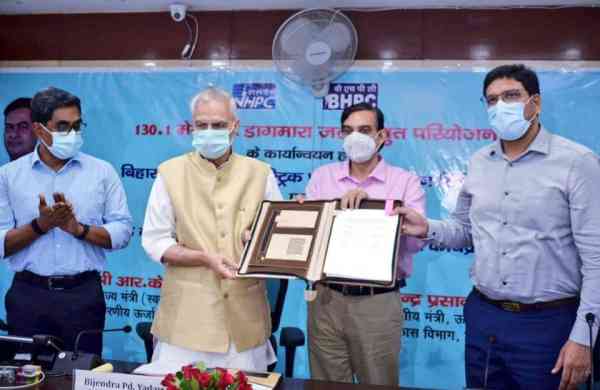 Express News Service
PATNA: A MoU for the Bihar’s mega Dagmara hydroelectric project, initiated with an aim toherald a new era of growth in power sector, was signed between the Bihar State Power Holding Corporation and the National Hydroelectric Power Corporation Limited (NHPC) on Monday.

The MoU was signed for setting up Bihar’s biggest hydroelectric power generation plant called the ‘Dagmara multipurpose hydropower project over the Kosi River in Supaul district.

Hans added further: “The total generation capacity of the ‘Run-of-River’ project will be 130.1 MW, which will comprise two power houses, while the barrage length would be 753 metre and it would have 36 gates on river Kosi River which has a total length of 233 km”.

Speaking on this occasion, Minister of State (Independent Charge), Power and New & Renewable Energy) RK Singh said this was a historic occasion for Bihar, as the Dagmara project would contribute immensely in India’s mission for energy transition for lesser use of fossil fuel. “About Rs 2,500 crore investments willcreate immense opportunities for generating both direct and indirect employment in Bihar.”

Bihar’s Energy Minister Bijendra Prasad Yadav said Chief Minister Nitish Kumar has congratulated the people of Bihar for signing of the MoU. “Kosi for long has been known as ‘sorrow of Bihar’, but Dagmara project will convert it into a river of opportunities,” he said, adding this was first of its kind projectfor the whole country and different from conventional projects.

The barrage on the Kosi would provide an alternate route to cross over the river. Besides, the project will control river meandering to a greater extent.

Pratyay Amrit, Additional Chief Secretary, Health Department, who played an instrumental role in taking off of the project, said the Dagmara project besidesgenerating job would create recreational facilities such as fisheries and eco-tourism. “It will also uplift the socio-economic condition in the project area,” he said. Amrit said the Bihar government would fully cooperate with NHPC for implementation of the project.