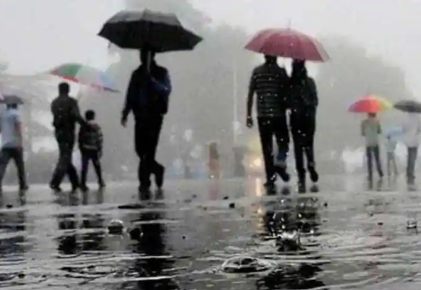 Monsoon has knocked in Chhattisgarh. Due to which it is raining continuously in many districts of the state. Heavy rains have thrown life out of gear in many districts including the capital. Roads have been waterlogged. According to the Meteorological Department, there is a possibility of continuous rain for the next 2 to 3 days. An alert has been issued regarding this.
Even after the monsoon is late in Kerala, the monsoon has knocked in Chhattisgarh five days before the scheduled time. Monsoon has entered Chhattisgarh via Konta and Sukma via Telangana. The monsoon coming from the northwest is progressing at a very fast pace.
Due to which this time the monsoon has reached in the capital Raipur also 5 days before its scheduled time. According to meteorologists, a low pressure area has formed in the Bay of Bengal and in the northwest. Due to which a yellow alert has been issued for the next 24 hours and red alert for 48 hours.
The problem of water logging has arisen at many places in Durg district. Water is flowing over Mahanadi Anicut in Rajim. Due to rain in Dhamtari, Lormi, the coolness in Fiza dissolved.