If there is any national party today, it is BJP, says ex-Congress leader Jitin Prasada after joining saffron party 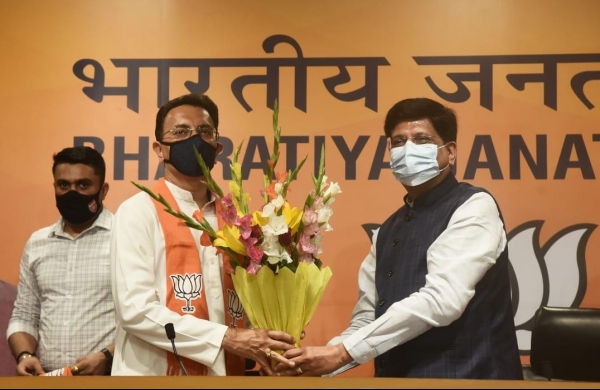 By Agencies
NEW DELHI: Congress leader Jitin Prasada joined the BJP on Wednesday, in a shot in the arm for the saffron party as it prepares for assembly elections in Uttar Pradesh scheduled for early next year.

He joined the BJP in presence of Union minister Piyush Goyal and its chief spokesperson Anil Baluni.

Speaking on the occasion, Prasada said, “I have a three-generation connection with Congress, so I took this important decision after a lot of deliberation. In the last 8-10 years I have felt that if there is one party that is truly national, it is BJP. Other parties are regional but this is the national party,” said Prasada afrer joining the BJP.

He also hailed Prime Minister Narendra Modi for his leadership of the country and also lauded other senior party leaders.

Noting that politics is for public service, Prasada said he realised he cannot do it in the Congress and could not protect people’s interests.

Goyal heaped praised on him, lauding him as a leader of stature whose induction will boost the BJP.

It will also help him in serving the society, the minister added.

The 47-year-old Prasada, a former Union minister, comes from a well known Brahmin family of Uttar Pradesh and was serving as the Congress leader in-charge of West Bengal before joining the BJP.

His father Jitendra Prasada was a noted Congress leader.

With the Congress in dire straits in Uttar Pradesh and he himself losing the Lok Sabha polls twice in a row, Prasada’s decision to join the BJP may help him politically at a time when the saffron party is working overtime to boost its ranks in preparation for the assembly polls.

It will also help the BJP keep Brahmins, a section of whom are said to be unhappy with the party in Uttar Pradesh, in good humour in the politically important state of India, party sources said.

Speculation was rife even during the 2019 Lok Sabha elections of Prasada joining the BJP, but it is believed that the Congress leadership had then managed to persuade him against quitting the party.

Chirag Paswan attacks JD(U) for split in his party, spares BJP as he vows to fight back