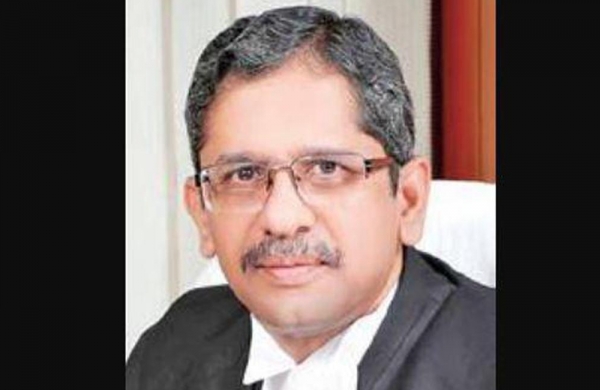 By PTI
NEW DELHI: Amid debate whether the Centre’s decision to provided free COVID-19 vaccine to all above 18 years was triggered by the Supreme Court’s recent remarks on the jab policy, a class Vth student of Kerala, Lidwina Joseph, has written to Chief Justice N V Ramana lauding the top court for its effective intervention and saving lives in the fight against pandemic.

Joseph, a student of Kendriya Vidyalaya at Thrissur, also enclosed in her letter a drawing depicting discharge of duties by the apex court where a judge is seen hammering down coronavirus and has the tricolour, lion capital and smiling portrait of father of the nation.

“I was much worried about the deaths in Delhi and other parts of the country due to Corona. From the newspaper I understood that your honourable court has intervened effectively at the sufferings and death of ordinary people in the fight against Covid-19.

“I am happy and feel proud that your honourable court has moved orders for supply of oxygen and saved many lives. I understood your honourable court has initiated effective steps in bringing down Covid-19 and the death rate in our country especially in Delhi. I thank you, your Honour for this. Now I feel very proud and happy,” Joseph wrote to CJI Ramana towards the end of May when Delhiites were facing tough times due to the deadly second corona wave.

The lucky girl got Chief Justice of India’s response and best wishes as well for her “beautiful letter” and “heart-warming illustration of a judge at work” in her drawing accompanying the letter.

“I have received your beautiful letter along with a heart-warming illustration of the Judge at work. I am really impressed with the way you kept track of happenings in the country and the concern that you have displayed for the well-being of people in the wake of the pandemic.

“I am sure you will grow-up into an alert, informed and responsible citizen who will contribute immensely towards nation building,” the CJI wrote back wishing the best and all round success to the little girl.

Prime Minister Narendra Modi announced on Monday that the central government will provide free coronavirus vaccine to states for inoculation of all above the age of 18 from June 21 and this led to an intense debate in the media as to who and what triggered the decision.

As per news reports, while Kerala Chief Minister Pinarayi Vijayan thanked the Centre for the decision, the Delhi government credited the Supreme Court for the decision announced by the Prime Minister in his address to the nation.

Some reports also said the Centre had initiated the decision making process and the ground work before the apex court’s remarks.

Few days before the Prime Minister announced free COVID inoculation for those above 18 years of age from June 21, the Supreme Court, in its May 31 order which was uploaded two day after the hearing, had asked the Centre to review its vaccination policy saying it was “prima facie arbitrary and irrational” for allowing states and private hospitals to charge people of 18-44 age group for the jabs.

Maharashtra government announces slashing of school fees by 15 per cent