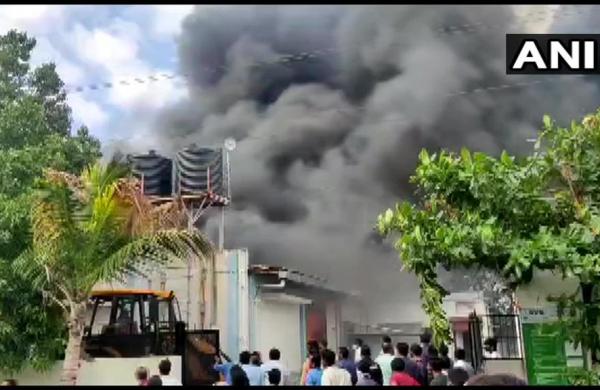 By Express News Service
MUMBAI: As many as 18 people, including 15 women died and many are missing after a major fire at a chemical and sanitiser manufacturing plant in Pune on Monday. The fire broke out after a machine exploded at the plant operated by SVS Aqua Technologies. At least 37 people, mostly local residents, were working at the facility when the incident happened.

The fire trapped the workers inside the unit, killing 18. The Maharashtra Industrial Development Corporation’s (MIDC) fire forces quickly reached the spot. However, with the blaze blocking out the exits, the authorities had to break a wall to gain access to the building. Though the blaze, which started around 4.00 pm, has been fully doused, a search was continuing as of Monday night, to locate the workers who have gone missing.

The plant is located in Urawade, near Pirangut in Mulshi tehsil on the outskirts of Pune. It is engaged in producing chlorine dioxide for water purification. Chlorine dioxide is a chemical compound that has a variety of antimicrobial uses, including the disinfection of drinking water. The thick plume of smoke emanating from the factory caused panic in the area. Pune rural police reached the spot to control the crowd around the factory.

Earlier in the day, another fire broke out in the National Chemical Laboratory in Pune. No casualties were reported and the cause of the fire was yet to be ascertained, officials told journalists.The employees used the fire extinguisher to douse the fire immediately. Explosive items that were housed in the laboratory were moved to safe locations, which helped avert a major causality.  “A major accident was averted by quickly shifting flammable organic solvents kept in the lab with the help of staff,” fire officials said.

“I am deeply saddened by the heart-wrenching news of the fire at a chemical factory in Pune. I express my condolences to those who lost their loved ones in this accident and pray for the speedy recovery of those injured,” Shah tweeted. Union minister of railways Piyush Goyal tweeted saying, “Deeply saddened to learn about the loss of lives due to a tragic fire accident at a factory in Pune. My thoughts and prayers are with the bereaved families in this hour of grief. May the injured recover soon.”