Ankita got a compassionate appointment, the family got better, thanked the government 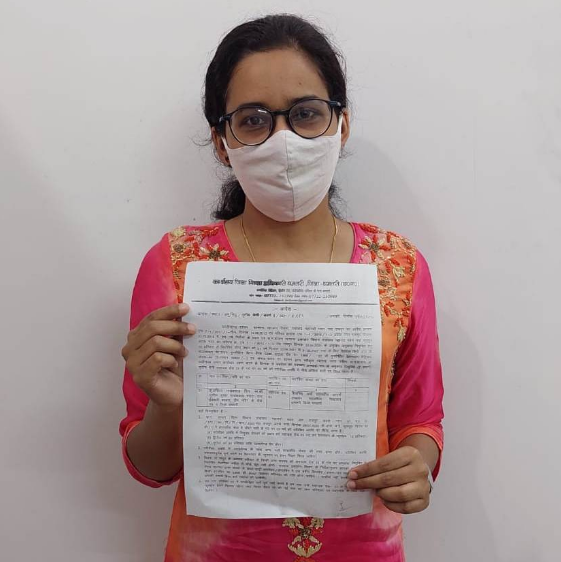 Keeping in view the death due to infection of Kovid-19, the Chhattisgarh government had taken an important decision to relax the provisions of the previous compassionate appointment, whose direct benefit would be immediate compassionate appointment to the next of kin of the employees working in government services after their death. Are getting. Shri Sunil Kumar Gaikwad, a resident of the local Marathapara ward, who was posted as a clerk in the School Education Department, died suddenly in August 2020. In such a situation, his family became destitute and the financial situation became turbulent. Last month, the State Government relaxed the provision of compassionate appointment, due to which the daughter of the deceased employee Shri Sunil Gaikwad, K. Ankita got an immediate appointment on the post of Assistant Grade-03, which supported her family. Q. Ankita told that her father died on 17 August 2020, after which she faced problems of maintenance in front of the family. Educated in Chemistry till MMC, Ankita started giving tuition to the children to run the house, which supported the family to a great extent, yet it was not enough to run the family. Meanwhile, in the Corona period, an order was given by the Chhattisgarh government to end the bond of 10 percent on the death of a government servant and provide compassion, which also benefited the Gaikwad family. District Education Officer K. Ankita was given compassionate appointment as Assistant Grade-03 in Shiv Singh Verma Government Model Higher Secondary School, Dhamtari. He said that though the incompleteness of the family would never end due to the absence of a father, the Chhattisgarh government, playing the role of a father, provided compassionate appointment. Ankita said that she had never imagined that she would be able to get the job so soon amid so many pending cases of compassionate appointment. This was possible only due to the sensitivity of the state government and today she was able to do something for her family. Expressing gratitude to Chief Minister Bhupesh Baghel and his government, he described the decision as historic.
District Education Officer Dr. Rajni Nelson told that similarly Mr. Rituraj Sahu, Mrs. Vidyavati Netam, Mr. Somesh Nishad, Mr. Praveen Singh Potai, Mr. Vineet Singh, K. Samiksha Yadav and Smt. Savita Sori on the post of Assistant Grade 3 in the School Education Department and Mrs. Hileshwari Sahu was given compassionate appointment on the post of assistant teacher after relaxation in the recruitment rules.