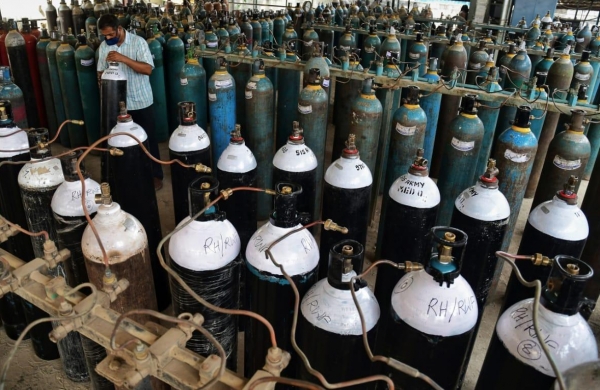 By PTI
AHMEDABAD: The Gujarat government has initiated the process to set up more than 75 oxygen plants to produce additional 300 MT of the life-saving gas if the demand for it goes up during the possible third wave of COVID-19, Deputy Chief Minister Nitin Patel said on Sunday.

At present, 800 to 900 MT of medical oxygen is available at any time in the state, he said.

“The state government has started working on the scenario when there is a sharp increase in the number of COVID-19 patients requiring medical oxygen in the third wave of the pandemic,” he told reporters in Mehsana.

“In the worst situation during the second wave, Gujarat required over 1,200 MT oxygen,” he said.

With the aid from the PM Care Fund, grants of MPs and MLAs, and funds from charities, Gujarat has started working on setting up more oxygen plants, Patel said.

“Our first target is to produce 300 MT of oxygen for us to become self-reliant even when the number of daily patients go past the 14,000-mark,” he added.

The government has formed a committee to see to it that there is no shortage of medical oxygen even during the worst pandemic situation, unlike in the second wave when the government had to press hard to meet the demand, Patel, who also holds the health portfolio, said while on a trip to Mehsana to inspect various health facilities.

“We have 800-900 MT of medical oxygen available at any time in Gujarat. To meet the demand in the possible third wave, when the number of daily patients may go beyond 14,000, we need an additional 300 MT oxygen.

“We have already started working on setting up oxygen plants for the purpose and identified more than 75 locations for large oxygen plants. They are at different stages of development,” he said.

Facilities are also being set up to refill oxygen cylinders to be supplied to the patients getting home treatment, the deputy CM said.

Funds for the purpose is being raised from MP-MLA grants, as well as government fund, donations of private companies, and PM Care Fund, Patel said.