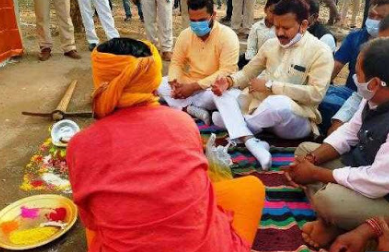 An action plan has also been prepared to promote tourism business in the district. Parliamentary Secretary Shri Vinod Chandrakar today laid the foundation stone and ground worship of works of eco tourism project, construction of Buddha Vatika Shed etc. at Kodar Dam. In today’s program by the Forest Department, Kovid rules were followed. The foundation stone of the three Buddha park was also laid from Kuhri to Sirpur.
Speaking on the occasion of the Chief Guest, Parliamentary Secretary Shri Vinod Chandrakar said that the State Government is working to promote tourism in the State. So that you will be aware of the glorious heritage, tradition, folk culture here. Today the foundation stone for boating, pathway, ghat and tatting and other works including boating facility for boating in Kodar Dam and Bhoomi Pujan were done. was done. He said that initiatives were being taken to promote tourism in Kodar Dam from the very beginning. The attention of Chief Minister Bhupesh Baghel was drawn in this direction. for which it has been approved.
Sirpur is a center of attraction on the international tourist map due to its historical and archaeological importance. Now to make its path more beautiful, beautiful Buddha gardens will be built at five selected places from Kuhri to Sirpur. By making these gardens, the passengers will be able to rest. District Forest Officer Mr. Pankaj Rajput gave detailed information about the project. He said that work will be done in eco tourism at a cost of about 38 lakhs. Boating facility will be available here in three to four months. Similarly, a park is to be constructed at five places at a cost of about 9-9 lakhs. After some time, boating facility will be available to the tourists for boating in the Kodar dam. At the same time, arrangements will also be made to stay in the forest at low prices.
In the coming days, tourists will be able to get boating facilities for boating here. He said that every effort is being made to promote tourism in the historical city of Sirpur also. Sirpur was once considered the largest Buddhist site. After the formation of Chhattisgarh state, many statues of Lord Buddha and Buddhist sites were found in Sirpur area in the excavations done by the Archaeological Department. When its fame spread all over the world, the religious guru Dalai Lama also came to Chhattisgarh a few years ago.