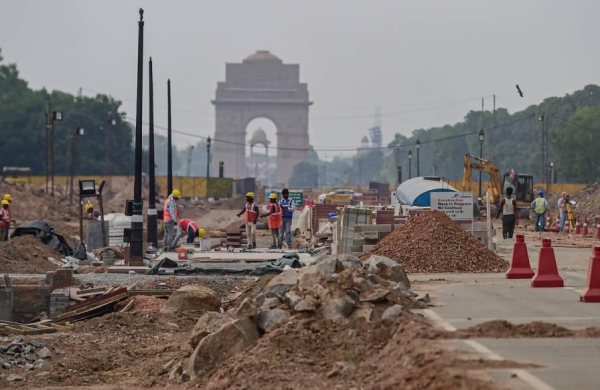 By PTI
NEW DELHI: The Delhi High Court will decide on Monday whether to allow the continuation of the Central Vista project work during the prevailing Covid pandemic.

A bench of Chief Justice D N Patel and Justice Jyoti Singh, which had been hearing a plea for suspending the ongoing construction work during the Covid pandemic, has fixed May 31 for delivery of its judgement on it, the high court’s cause list revealed on Saturday.

The court had reserved its judgement on May 17 on the joint plea by Anya Malhotra, a translator, and Sohail Hashmi, a historian and documentary filmmaker.

The two had contended in their plea that the project was not an essential activity and can be put on hold for time being.

During the May 17 hearing, the Centre had termed the plea as a “facade” or a “disguise”, aimed at stalling the project.

The petitioners on the other hand had contended they were only interested in the safety of workers at the site and citizens living in the area.

The petitioners’ counsel had likened the project to “Auschwitz”, a German concentration camp during World War II.

Hard hitting arguments against the maintainability of the plea were made during the hearing.

Shapoorji Pallonji and Company Pvt Ltd, which has been awarded the tender for the project, had also opposed the plea, saying it lacks bonafide and the company was taking care of its workforce.

Terming the Central Vista project as “central fortress of death” and comparing it to “Auschwitz”, the petitioners’ counsel Sidharth Luthra had contended that the Centre’s claim on the availability of medical facilities, testing centre and other amenities on the site were all false.

He had said only empty tents have been pitched at the site and there were no beds for workers to stay or sleep there.

Solicitor General Tushar Mehta, appearing for the Centre, however, had taken strong exceptions to the project being dubbed as ‘Auschwitz’ and said “one can criticise and be venomous” about it but such terms should not be used in courtrooms.

Countering the petitioners’ claims, the Centre’s law officer had said one of the petitioners had been opposed to the project long before it got the go-ahead from the Supreme Court in January this year.

He said the petitioners were not concerned with the health and safety of workers at other construction sites in the city.

“Public interest is very selective (in the instant case) about the health of workmen,” he had added and urged the court to dismiss the plea.

He had said the petitioners cannot decide what is the safe timeline for completing the project and the company has to finish it by November so that the Republic Day parade can be held on the Rajpath.

The project entails construction activities on Rajpath and the surrounding lawns from India Gate to Rashtrapati Bhawan, the petition, filed through advocates Gautam Khazanchi and Pradyuman Kaistha, had said.

The project envisages building a new Parliament House, a new residential complex to house offices and the Prime Minister and the Vice-President.

It will also have new office buildings and a Central Secretariat to accommodate various ministries’ offices.