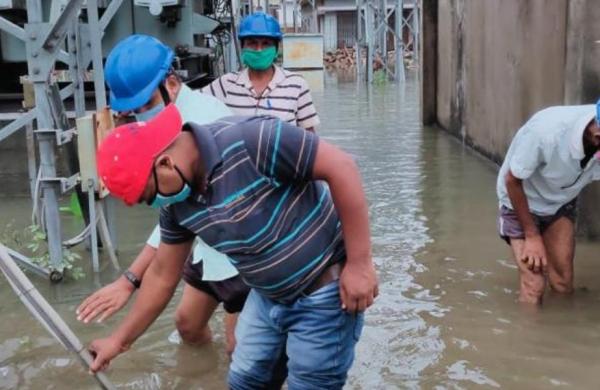 Express News Service
PATNA: Shubham Kumar, an executive working from home in Vaishali, was worried a lot on Friday and Saturday and had sought off from his boss. Reason: Fear of massive interruption in the supply of electricity due to super cyclone Yaas.

But his apprehension proved transitory when he started working after a small disruption of an hour on Friday when Bihar was lashed by the cyclone with heavy rainfalls. “It was unbelievable that the power got restored in village in so short time. Thankfully, Bihar has done this first time in a record short notice,” he remarked.

Thousands of manpower and the linemen of Bihar State Power Holding Company Ltd (BSPHCL) bracing odds amid the heaviest rainfalls with speedy wind, set a record in restoring the power within 12 hours in remotest parts of the state also.

The department, which is one of the USP of state government performances in Bihar, had made elaborate arrangements to deal with the cyclone post effect in the electricity supply wings.

In Bihar as per official sources, 35 urban feeders were affected by the impact of cyclone Yaas but all of these feeders were set within a day. Out of 1015 rural feeders in the state, supply of power was interrupted in 139 only out of which more than 115 were restored till Saturday.

“We took the cyclone as a challenge and made all arrangements before the cyclone made landfall in the state.The result – less damages, shorter disruption and fast restoration,” BSPHCL chairman Sanjeev Hans said.

Hans, who is considered as one of the tough task masters in state government, has made the control rooms open in every districts which will continue till May 30. “The entire pool of engineers, linemen and the contractual manforce with all tools and materials were stationed in a mission mode a day in before the cyclone hit the state,” Hans said.

Amid the COVID crisis, the employees had been vaccinated and encouraged to such an extent as power warriors that they can conquer over any kind of disaster. “Additional manpower with adequate material like insulators, conductors, raincoats, gloves, ropes and cranes etc has been stationed still today to swing into action whenever required,” Hans said.

Thousands of linemen, engineers and junior engineers braving against the heavy rainfall for the first time were seen removing fallen trees, snapped wires and rectifying faults in knee deep water at many places.

Those involved as contractual manpower were seen working till late evening in knee deep water. Two of them said that restoring power had become their chief’s challenge. “We will not get it defeated,” saidUday Kumar, who got wet in the heavy ran at Sarai.

In Katihar also, electric engineers and others were seen working in deep water to restore the power and they did it successfully.

A senior said official said, “We have taken the challenge of keeping power supply uninterrupted andrestoration after damages by the cyclone as a war-time like challenge. And thanks to encouragement, given by CM Nitish Kumar, energy minister Vijendra Yadav and our boss Sanjeev Hans, we have succeeded.”

Hans also said that the department is working on providing electricity connection to about 2.7 lakh farmers of state for agriculture works with a facility of connection charges and payment of security money in installations to the farmers.