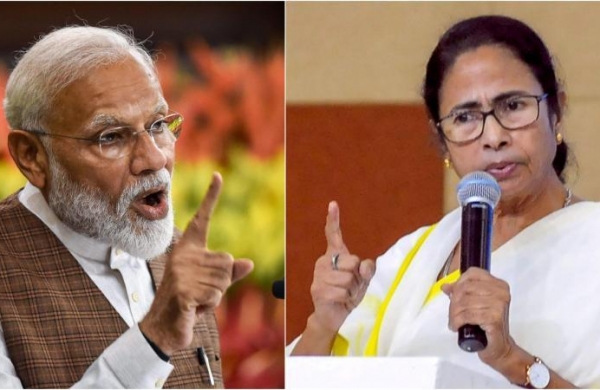 By PTI
KOLKATA: Alleging that the BJP-led Centre was pursuing “vendetta politics”, West Bengal Chief Minister Mamata Banerjee on Saturday appealed to the Union government to withdraw its order recalling Chief Secretary Alapan Bandopadhyay and allow the senior bureaucrat to work for people amid the COVID-19 crisis.

She also claimed that Prime Minister Narendra Modi and Home Minister Amit Shah were trying to create problems for her government at every step as they were yet to come to terms with BJP’s defeat in the assembly elections.

Banerjee further stated that she was ready to touch Modi’s feet if told to do for the sake of West Bengal’s growth and development.

“Because you (Modi and Shah) cannot digest BJP’s defeat in (Bengal), you have started creating problems for us from Day one. What is the fault of the chief secretary? “Recalling the chief secretary amid the COVID crisis goes on to show that the Centre was indulging in political vendetta,” she asserted.

Talking about the criticism she faced for skipping the review meeting with Modi on cyclone devastation, Banerjee said, “It was supposed to be held between the PM and the CM. Why were BJP leaders called to the session?”

She also claimed that opposition leaders were not invited to similar review meetings held in Gujarat and Odisha, the two states that also faced cyclone fury over the past few days.

The Centre on Friday night sought services of West Bengal Chief Secretary Alapan Bandyopadhyay and asked the state government to relieve the officer immediately, a move termed by the ruling Trinamool Congress as “forced deputation”.

ALSO READ | ‘Has this ever happened since Independence?’ TMC on Centre’s Bengal Chief Secretary move

Bandyopadhyay, a 1987-batch IAS officer of West Bengal cadre, was scheduled to retire on May 31 after completion of 60 years of age.

However, he was granted a three-month extension following a nod from the Centre.

West Bengal Chief Minister Mamata Banerjee had written to Prime Minister Narendra Modi urging him to grant Bandyopadhyay an extension for at least six months in view of his experience of handling the COVID-19 pandemic.

In a communique to the state government, the Personnel Ministry on Friday said the Appointments Committee of the Cabinet has approved the placement of the services of Bandyopadhyay with Government of India as per provisions of the Indian Administrative Service (cadre) Rules, 1954, “with immediate effect”.

While asking the state government to relieve the officer with immediate effect, it also directed Bandyopadhyay to report to the Department of Personnel and Training, North Block, New Delhi by 10 am on May 31.

The order from the Centre angered the Trinamool Congress which said the decision to seek Bandyopadhyay’s services was because the people of the state gave an overwhelming mandate to the chief minister.

Trinamool Congress MP Sukhendu Sekhar Roy described it as “forced central deputation” of the chief secretary and asked, “Has this ever happened since Independence? Forced central deputation of a chief secretary of a state? How much lower will Modi-Shah’s BJP stoop?” TMC spokesperson Kunal Ghosh said the decision was taken to derail the good work done by Bandyopadhyay, “a true soldier of Mamata Banerjee”.

“The BJP is yet to accept their loss in the assembly elections and that is why they are doing such petty politics. This is nothing but vindictive politics of the BJP,” he claimed.

“At a time when Bengal is facing the COVID pandemic and the devastations caused by Cyclone Yaas, the central government is trying to make the people of the state suffer. They are acting like an enemy of the people of Bengal,” Ghosh said.

BJP’s state general secretary Sayantan Basu told PTI that it was an administrative decision by the Centre.

“It is an administrative issue involving two governments and the state BJP has nothing to comment on it,” he said.

Bandyopadhyay took over as the chief secretary of West Bengal after Rajiva Sinha retired in September last year.

The order came on a day when the prime minister visited Odisha and West Bengal states to review the situation and damages caused by Cyclone Yaas.

Banerjee had a brief meeting with the prime minister at the Kalaikunda airbase where she handed over a memorandum on the post-cyclone situation.

The BJP leaders later accused her of cutting short the planned review meeting.

On May 24, Banerjee, while announcing extension of Bandyopadhyay’s extension, had said, “Our chief secretary has got an extension for three months. We are happy because he has got the experience of working during last year’s Amphan as well as during the ongoing COVID-19 pandemic”.

This is the second time that the Union government has invoked the All India Services Rule in the last five months.

Earlier in December, the Centre had directed the West Bengal government to immediately relieve three IPS officers so that they could join their new assignments at the Centre.

The officers, Rajeev Mishra (1996 batch), Praveen Tripathi (2004 batch) and Bholanath Pandey (2011 batch), were directed to report on central deputation in December last year after the West Bengal government refused to send its chief secretary and police chief to Delhi to discuss the law and order situation in the state.

The three were responsible for the security of BJP President J P Nadda during his visit to the state for building up momentum for electioneering when his convoy was attacked at Diamond Harbour.

However, according to the officials, these three officers were never released by the state government.

The CM on Friday sought a Rs 20,000-crore relief package after submitting a report to Prime Minister Naredra Modi on damages caused by cyclone ‘Yaas’, even as she faced harsh criticism for skipping a longer review meet to assess the post-storm situation.

Modi flew down to Odisha earlier in the day to review the post-cyclone situation, and then made his way to Bengal, where the storm wreaked havoc in the coastal districts.

The state has incurred a loss of Rs 20,000 crore due to the cyclone, Banerjee said.

“We have sought a package of Rs 10,000 crore each for the redevelopment of Digha and the Sunderbans. It could well be that we might not get anything,” she told reporters in the tourist town of Digha, shortly after meeting Modi at Kalaikunda in Paschim Medinipur district.

“The CM came, handed over some papers to the PM and left. She did not participate in the review meeting. This is a day when we all should have been united in seeking assistance from the central government. There is no scope of politics during this crisis,” Adhikari said.

In a tweet, Banerjee said she had “proceeded to review the relief and restoration work at Digha”, after apprising the PM about the post-cyclone situation in West Bengal.

Her absence from the review meeting was decried by Dhankhar and Union Home Minister Amit Shah, who said Banerjee “put arrogance above public welfare”.

“Mamata Didi’s conduct today is an unfortunate low. Cyclone Yaas has affected several common citizens and the need of the hour is to assist those affected. Sadly, Didi has put arrogance above public welfare and todays petty behaviour reflects that,” Shah tweeted.

Dhakhar, in another tweet, said: “It would have been in interest of state if CM and officials @MamataOfficial had participated in Review Meet with PM. Difficult to appreciate. No official present in Review Meet and no meeting between PM and CM, much less one to one. Such confrontation has no place in democracy.”

“Such boycott not in consonance with constitution and federalism. Certainly by such actions neither public interest nor interest of state has been served.”

Adhikary added that Banerjee’s decision to give the meeting a miss has shown once again that she is “insensitive” to the sufferings of the people of the state.

Meanwhile, a release issued by the Prime Minister’s Office said Modi has announced a financial assistance of Rs 1,000 crore for immediate relief activities.

“Rupees 500 crore would be immediately given to Odisha. Another Rs 500 crore has been announced for West Bengal and Jharkhand, which will be released on the basis of the damage.”

“The Union Government will deploy an inter-ministerial team to visit the states to assess the extent of damage, based on which further assistance will be given,” it said.

The PM has also declared an ex-gratia of Rs 2 lakh to the next of kin of the deceased and Rs 50,000 for those seriously injured in the cyclone, the release said.

Cyclone ‘Yaas’ rampaged through parts of India’s eastern coast on Wednesday, killing at least four people and forcing more than 21 lakh people to be evacuated to safe shelters in West Bengal, Odisha and Jharkhand.

Heavy rainfall was reported at several places under the impact of the cyclone in all the three states on Thursday.