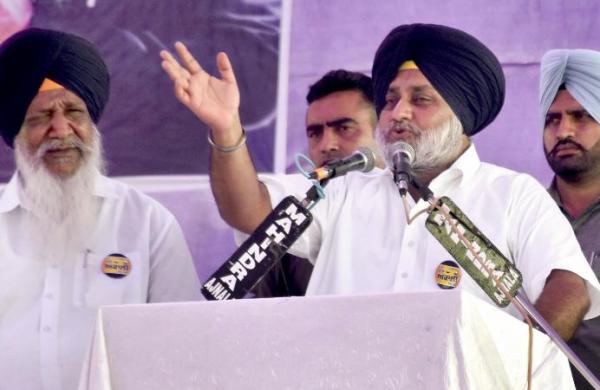 Sidhu’s remarks were in response to Badal’s criticism of the Punjab government.

The minister did not elaborate but appeared to be referring to the recently-introduced Roche’s antibodies cocktail drug priced at Rs 59,750 per dose launched this week in India.

It is for restricted emergency use to treat mild to moderate COVID-19 in adults and paediatric patients (12 years or weighing more than at least 40 kg).

However, the drug was not available in the country when Badal had tested positive for COVID-19 in March.

The Shiromani Akali Dal (SAD) on Tuesday said when the Shiromani Gurdwara Parbandhak Committee (SGPC) was able to procure Covaxin doses within one week of placing the order then why the Amarinder Singh-led dispensation could not do so.

He had alleged that the Congress-led government lacked the intention to procure vaccines for people of the state.

“Do not compare Sukhbir Singh Badal with the state government. He says too much and he had earlier spoken a lot as well and even now. Sukhbir Badal had himself got a vaccine worth Rs 62,000 administered. Has he got Rs 62,000 worth a jab administered to the people of Punjab,” he asked while talking to reporters here.

Sidhu was replying to a question when asked that Badal had said if the SGPC could procure vaccine doses then why the state government could not do so.

“He (Sidhu) is completely wrong in saying this,” Sidhu, adding that the state government has also been procuring vaccines every day.

The health minister, however, welcomed the SGPC for coming forward to assist in the fight against COVID-19.

The SGPC, which is to start a vaccination drive next week, has also set up some Covid care centres in the state.

On the issue of black fungus or mucormycosis, Sidhu said that the state government could get only 1,000 injections against the demand for 15,000 doses raised with the Centre, which were insufficient.

“We are putting pressure on the central government to give us more injections,” he said.

To a question on vaccines, the minister said that Punjab was facing a shortage of the vaccine.

“We are not getting that much supply of vaccine doses which match our requirements which is a matter of concern. Every day we go hand to mouth,” said Sidhu.

Around 47 lakh people have been vaccinated so far, he said.

To another question on wastage of vaccines, Sidhu said, “There can be-one-and-a-half per cent wastage. They (Centre) themselves say 10 per cent. But we are not going to allow any wastage, which is like expiry date or anything else. If there is a breakage in any injection then it is a separate issue. Otherwise, we do not allow any wastage.”