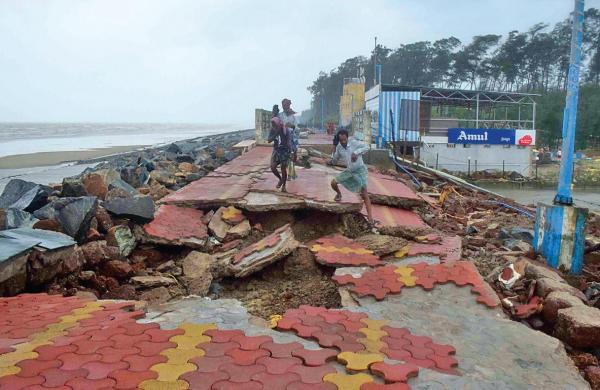 Express News Service
KOLKATA:  BJP’s Bengal unit has decided to stand by the common people affected by Cyclone Yaas and use the aftermath of the calamity as a medium to reach out. This is a change from BJP’s strategy after Cyclone Amphan last year, when it went hammer and tong against the ruling TMC, alleging irregularities in distribution of relief materials. This time, the saffron camp has instructed its ground-level workers to build a people-friendly image.

“We have asked our workers and leaders to stand by the common people after the cyclone. They have been asked to reach out to the victims with relief materials immediately,” said BJP’s West Bengal president Dilip Ghosh. After Amphan last year, the BJP leadership first got busy accusing the state government of not being able to send relief to affected areas and then raised the issue of corruption in distributing monetary assistance for the victims. This became the party’s election campaign as well.

A villager wades through a water-logged road after Cyclone Yaas in South 24Parganas in West Bengal;

“It won the party no electoral dividend in the Assembly elections. We failed to perform well in the Amphan-ravaged areas even after highlighting the ruling party’s failure and corruption over the issue of financial help to be extended. Despite having enormous resources, we failed to address the people in distress. Instead of standing by them and giving them food and other relief materials, we were busy organising protests and criticising the ruling party,” said a senior BJP leader.

Sources in BJP said this time, leaders and workers have been asked to connect with the affected people in the Assembly constituencies where they failed to win in the recent elections. “The party had been in full battle mode before Amphan struck last year and its single-minded aim was to conquer the last frontier of Bengal. The primary objective of keeping Bengal on boil and poaching on rivals had overshadowed the pressing needs of the people at the crisis period,” admitted another BJP leader.

The leader said that BJP workers have been asked to set up camps at the affected areas, provide the poor with food and tarpaulin sheets for those whose houses have been washed away. They have also asked workers to convert party offices into refuge centres for the affected and make all necessary arrangements to deliver a message that the BJP is with the people in this hour of crisis.