Lakshadweep on the boil 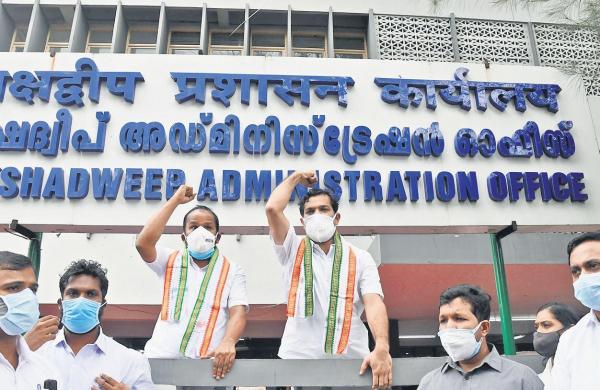 By Express News Service
The residents of Lakshadweep and political parties have launched a #SaveLakshadweep campaign demanding the recall of administrator Praful Khoda Patel. The islanders allege that the reforms introduced by Patel, after he took over in December 2020, are detrimental to the traditional social, cultural and economic character of the Union territory. Opposition parties including the Congress allege that the unilateral decisions of the administrator will destroy the cultural heritage of Lakshadweep and affect people’s livelihoods. A look

WHO IS PRAFUL K PATEL?

Praful Khoda Patel, who is the administrator of the Union Territory of Dadra and Nagar Haveli and Daman and Diu, was given the additional charge of Lakshadweep in December following the death of then administrator Dineshwar Sharma. Praful is a BJP leader from Gujarat and had served as the Minister of State for Home in the Narendra Modiled state government in Gujarat for two years

1. Prohibition of slaughter without certificate from competent authorityPraful Patel has proposed the Lakshadweep Animal Preservation Regulation, 2021, which bans slaughter of the cow, calf, bull and bullocks. Animals should be slaughtered only at places specified for the purpose. The sale and purchase of beef and beef products are banned under the proposed law. Persons who slaughter animals without a certificate are liable to be punished with imprisonment extending to one year and a fine of up to Rs 10,000. Besides, in February, mutton and chicken were removed from schools’ midday meal menus. Children had been provided nonvegetarian meals at Anganwadis till then

2. Land regulationsThe draft Lakshadweep Development Authority Regulation proposes changes in the existing land ownership and usage by giving sweeping, arbitrary and unchecked powers to the government to directly interfere with the islanders’ right to possess and retain their property. It empowers the government to pick any land for development activities Activities including building, engineering, mining, quarrying and other operations have been listed under development activities

3. Prevention of Anti-Social Activities Act, 2021The proposed law gives powers to detain a person without any public disclosure for a period of up to one year. Locals fear that bill will pave the way for detention without a trial and say that such a harsh law is not required. The island has a negligible crime rate, all the more reason why the law is suspect

5. Plan to allow sale of liquorThe administrator allowed sale of liquor at hotels and resorts in three islands in the name of tourism promotion. The Muslim majority island territory has remained a nonalcoholic zone for decades. Liquorsale was allowed only in Bangaram islands till now. Liquor was not allowed in other islands and travellers were not allowed to carry liquor

6. Winding up of dairy farmsDairy farms operated by the Animal Husbandry department have been shut down. On May 21, dairy farms of the local government were also ordered shut; all animals are to be auctioned by May 31

7. Coastal regulationThe island administration has demolished huts erected by fishermen along the coastline alleging violation of Coastal Regulation Zone and Coast Guard Act. These sheds were built by fisherfolk to keep their nets and fishing gear. The sheds were constructed under an exemption provided to the fisherfolk

8.Cargo diverted to MangaluruThe administration has diverted freight transit to Mangaluru, ending the trade ties between the islands and Kerala. The islanders depend on ports of Beypore and Kochi for logistics and medical facilities

9. Termination of services of employeesServices of hundreds of contract labourers working under various departments of the Union territory have been terminated. Casual and contractual workers of various government offices have been dismissed. The recruitment rules will be reviewed where the educational qualifications do not match the latest developments

10.Change in SOP for emergency evacuationThe administration has changed the standard operating procedure for emergency evacuation of patients. As per the order, all uncomplicated orthopaedic cases including hip fracture should be sent by ship. Medical officer should ensure that no cases other than emergency one are referred to for transfer by special sortie helicopter

11. Covid spreadLakshadweep had remained a Covid-19 green zone during the first wave of the pandemic, with the first case being reported only on January 18, 2021. Protesters allege that the changes in quarantine andtravel rules effected by the thennew administrator led to rapid spread of the coronavirus disease.The islands have so far reported 7,111 cases, of which 2,320 are active. As many as 26 people havedied due to the disease

The Lakshadweep administration has called an all-party meeting on May 27 to discuss the issues raised by residents. Representatives of the Congress, NCP and BJP will attend the meeting, which will be held online

People of Lakshdweep have approached United Nations Secretary General António Guterres, as wellas the United Nation’s Permanent Forum for Indigenous Issues, against the actions of the new administrator

#SaveLakshadweep campaign has been trending on social media since May 23. Many prominent personalities and celebrities have come forward in extending their support to the campaign