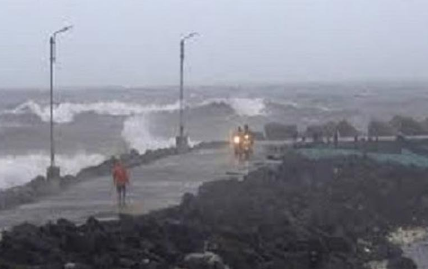 The cyclonic storm Yas from the Bay of Bengal has taken its form. An alert has been sounded in several states after the Yas Tandava in Odisha and West Bengal. Cyclone Yas has reached Balasore in the south of Odisha. According to the Meteorological Department, the process of landfall is going on from 9 am. Strong sea waves in Bengal, along with coconut trees have also raised the waves of the sea. Water has entered the residential areas. Due to the increase in the water level in the rivers, many areas of coastal districts of West Bengal, East Medinipur and South 24 Parganas were flooded on Wednesday. Officials have said that embankments have broken at several places in both coastal districts due to rising water level. Due to this many villages and small towns have been submerged. The water level of many rivers including Vidyadhari, Hooghly and Rupnarayan has increased. Odisha Disaster Rapid Action Force (ODRAF) team has removed the fallen trees on the roads in Paradip Nagar area of ​​Jagatsingh Pur. Odisha Police informed about this. Fishing boats have been damaged in Odisha Paradip. Most parts of West Bengal and Odisha received overnight rains. At least two people died due to electrocution in the Hooghly and North 24 Parganas districts of West Bengal after the storm on Tuesday. About 80 houses were partially damaged. Around 404 rescue teams, including 52 teams of National Disaster Response Force (NDRF), 60 teams of Odisha Disaster Rapid Action Force (ODRAF), 205 teams of fire brigade and 60 timber cutting teams of forest department are deployed in sensitive districts of Odisha. Has been done. West Bengal and Andhra Pradesh have also deployed a large number of personnel from the disaster relief force, police force and fire force.

The Meteorological Department (IMD) said that there is a possibility of water filling in 5 sub-divisions and blocks in West Bengal and 4 in Odisha. Most of the water is expected to be filled in Bhadrak district. A full moon is also the reason for the storm with such high waves. IMD DG Mrityunjay Mohapatra said that the most damaging wind due to the cyclone was moving in Baleshwar, Bhadrak and Midinipur in West Bengal. Even the districts inside Odisha will have wind speeds of 60-70 kmph. All these wind speeds will remain till tonight, after which it will be reduced to a great extent. Heavy to very heavy rains are expected along the coast of West Bengal and Odisha. IMD Director General Mrityunjay Mohapatra said that the storm is crossing the Odisha coast south of Baleshwar. Its wind speed is now 130–140 kmph. The landfall process is still underway, which will be completed in 3 hours. After this, it will weaken and move in the north-west direction. The most damaging wind due to the cyclone is moving in Baleshwar, Bhadrak and Midinipur in West Bengal. Wind speed will be 60-70 kmph even in the districts inside Odisha. The cyclone Yas crossed the Balasore border of Odisha. Yas will reach Jharkhand on Thursday morning. The wind speed will then be 60–70 km per hour. Odisha has received heavy to very heavy rainfall in the last 24 hours. Heavy to very heavy rains are likely over North Odisha and Coastal Odisha today. About 6 flights from Mumbai to Kolkata and Bhubaneswar have been canceled in view of cyclonic storm Yas. These include three incoming flights and three incoming flights.