With the improvement in the condition of corona infection, development work will be done fast now: Mr. Bhupesh Baghel 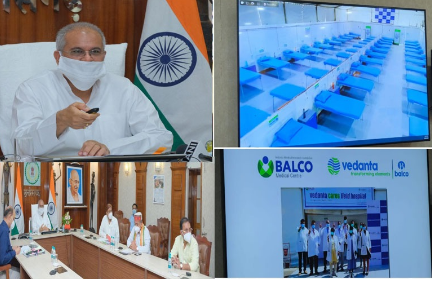 Bhupesh Baghel has said that the condition of corona infection in the state is improving rapidly. The infection rate has also come down to only around 5 percent. Now, with normal life, development works will also be completed rapidly. He said that our campaign to build Nava Chhattisgarh has been affected for a while due to the Corona crisis, but neither our resolve to build Nava Chhattisgarh was affected nor will the pace of the development and progress of the state be affected. Due to the loss of time due to Corona, we will complete the development by increasing the pace of development works. The Chief Minister, in a program organized at his residence office here today, expressed his views after virtual bhumi pujan and dedication of various works costing about Rs 114 crore in Municipal Corporation Bhilai, Durg and Bhilai-Charauda in Durg district.

The Chief Minister performed Bhoomi Pujan of Transport Nagar in Bhilai-Charoda Corporation, to be constructed at a cost of Rs 56 crore 21 lakh. With this, transporters will get a lot of relief and the traffic system of the area will also improve. Along with this, he performed Bhoomi Pujan in the Bhilai-Charoda Corporation itself. It costs 16.19 crores. Shri Baghel inaugurated 22 works constructed at a cost of Rs 2.54 crore in Municipal Corporation Bhilai and performed 172 works of Rs 22.33 crore. He performed bhumi pujan for works costing Rs 17 crore 38 lakh under the head of the 14th Finance Commission under the Municipal Corporation fort. During the program, a family of two deceased government personnel was handed a letter of compassionate appointment. Collector Durg said that as per the relaxed provision of compassionate appointment by the state government, cases are being prepared for giving compassionate appointment to the families of 40 deceased workers.
Through video conferencing, Home Minister Shri Tamradhwaj Sahu, President of State Warehousing Corporation Mr. Arun Vora, MLA of the area and Mayor of the corporation were also associated with the program through video conferencing. Forest Minister and Minister in-charge of Durg District Mr. Mohammad Akbar, Public Health Engineering Minister Mr. Guru Rudrakumar and Urban Administration Minister Dr. Shiv Kumar Dahria, Advisor to Chief Minister Mr. Vinod Verma, Additional Chief Secretary to Chief Minister Mr. Subrata Sahu were present at Chief Minister’s residence.
The Chief Minister said that due to the second wave of Corona for the last one and a half months, the whole country as well as Chhattisgarh have faced a lot of difficulties. Development work has also been affected in these months and a half. But now the situation is improving rapidly in the state. The infection rate has also come down to only around 5 percent. The lockdown has been relaxed. Now, with life becoming increasingly normal, development works will also be done at a rapid pace. The work which had been stalled during the last one and a half months will also be completed fast. We will also compensate for the loss of time caused by the corona. For this, it is very important that we take great care towards Corona, so that our development work cannot be interrupted again. Only with social distancing, sanitization mask and vaccination can we win the war against Kovid.
Presiding over the program, Public Health Engineering Minister Shri Guru Rudrakumar said that under the leadership of Chief Minister Mr. Bhupesh Baghel, the development works in Durg district will be completed at a rapid pace. He congratulated and congratulated the citizens of the three municipal areas. Addressing the program, Home Minister Shri Tamradhwaj Sahu said that despite adverse circumstances, every effort is being made to give impetus to the development works in the state under the leadership of Chief Minister Shri Bhupesh Baghel. Development works are being carried out in every area. Plans were made and implemented for all classes in the state. The reduction was not allowed at any level. In the coming time, the pace of development will be faster.