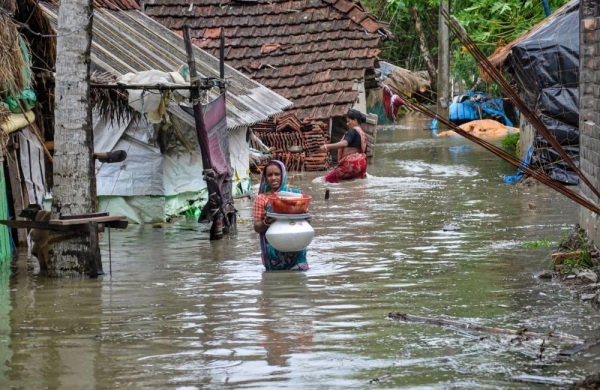 By PTI
KOLKATA: Several roads adjoining the sea beaches in Bengal’s Digha lay inundated, with some people seen wading through chest-deep water, as the tourist town and its adjoining places bore the brunt of Cyclone ‘Yaas’, which made its landfall in neighbouring Odisha on Wednesday morning.

Many areas in Purba Medinipur, of which Digha is a part, and South 24 Parganas were whiplashed by heavy rain, which accompanied the cyclonic storm.

Security personnel have been deployed at all vulnerable locations in the state to help and rescue people caught in the storm, a senior police officer said.

With the COVID-induced lockdown in place, security personnel has the situation under control as market places largely remained shut and people stayed indoors, he said.

Some residents, who were seen having difficulty plodding through the inundated roads in Purba Medinipur district, however, were moved to safety, the officer said.

At Ramnagar in Purba Medinipur, Army jawans, who were called in for relief operations, quickly fanned into localities that almost resembled lakes with trees jutting out here and there, to reach out to those in need.

A school, situated along the coast in Shankarpur, was washed away by the high and mighty sea waves.

In coastal Frazerganj, South 24 Parganas district, people struggled to move to safety along with their cattle, as roads were left water-logged amid heavy rain.

A landmover machine was seen turned upside down, with villagers perched atop, as swirling flood waters entered homes in the rural areas.

Street dogs were spotted swimming on the flooded roads.

The compound of the much-revered Kapil Muni Temple in Sagar Islands lay submerged, as tall waves crashed over the boardwalks.

Kolkata and some of its surrounding areas were battered by intermittent rain and gusty wind since morning, with civic officials and disaster management force personnel on toes to tackle eventualities.