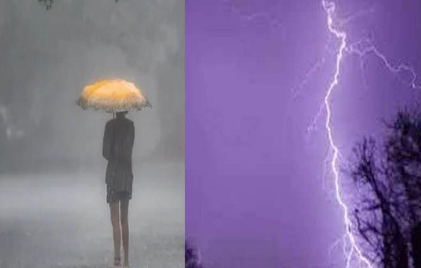 The Meteorological Department has issued a warning to be vigilant for the next 48 hours. Meteorologist RK Vaish has sent a letter to the Relief Commissioner Chhattisgarh Government regarding Orange Alert. He has warned of heavy rain with thunder. According to the Meteorological Department, there is a possibility of heavy rains with thunderstorms at one or two places in Balrampur, Sarguja, Surajpur, Jashpur, Raigad, Janjgir and Mahasamund districts of the state. According to meteorologist HP Chandra, due to the very strong cyclone that rose from the Bay of Bengal, the state is getting sufficient amount of moisture. Due to this, very strong wind is also prevailing in the state. On 26th May, light rain or thunderstorms are likely to occur at one or two places in the state. Due to high wind speed in the state, there is no possibility of any change in maximum temperature. The temperature in the northern part of the state is expected to fall steadily from May 28 onwards.