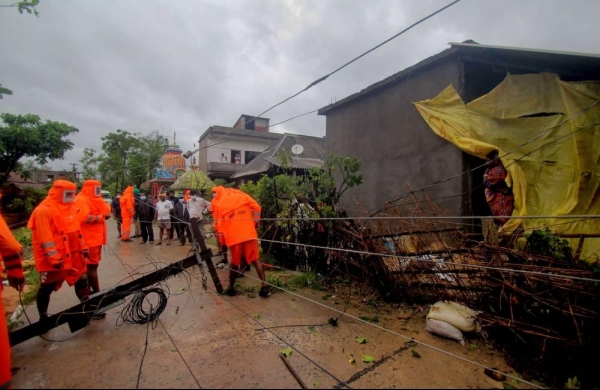 By PTI
KOLKATA: The cyclone Yaas has put the Kolkata port authorities on tenterhooks for some time as the rising water of the Hooghly river surpassed the height of the external lock gate of its Haldia Dock System, leading the draught level to go up to around eight metres on Wednesday, an official said.

However, water entered into the lock barrel the area between external and internal lock gates for not more than 30 minutes and no damage was done to ships or assets of the Haldia Dock system in Purba Medinipur district, port chairman Vinit Kumar said.

Being a riverine port, the level of draught (the depth of water required to float a ship) is very crucial for ships coming in and going out of the facility.

Kumar, who was in Kolkata, and Union Shipping Minister Mansukh Mandaviya from Delhi were monitoring the cyclone situation to ensure that prompt action is taken in case of any eventuality, officials said.

“The situation is well under control. All ships and equipment assets are secured. There is no casualty. Water seeped into the barrel and the tide led the draught to rise to eight meters while the height of the lock gate is seven meters,” Kumar told PTI.

However, an official of the Haldia Dock said that they were on tenterhooks for some time but the problem was temporary.

“There was no major problem. Pumps are pressed into service to drain out the extra water,” he said.

Kumar said that he is not expecting any major damage in the port due to the cyclone.

“A clear picture would emerge after more reports come. Shipping operations will begin once the effects of the cyclone are dissipated,” said the chairman of the Syama Prasad Mookerjee Port, earlier known as Kolkata Port Trust.

Cyclone Yaas pounded the coastal areas of north Odisha and West Bengal as it made the landfall at around 9 am on Wednesday with a wind speed of 130-140 kmph.

Chandbali in Bhadrak district recorded rainfall of 288.3 mm over the past 24 hours, followed by Rajkanika in Kendrapara (251 mm), the Bhubaneswar Meteorological Centre said.

The districts of Dhenkanal, Angul, Deogarh and Sundargarh received moderate rain, while the average precipitation in Keonjhar district was 44.7 mm, the department said.

The IMD has issued a red warning for nine districts that are expected to receive downpour in the next 24 hours.

Cyclone ‘Yaas’ wreaked havoc in the beach towns in north Odisha and neighbouring West Bengal, as it hit the coast around 9 am with wind speeds of 130-140 kmph, inundating low- lying areas amid a storm surge, officials said.