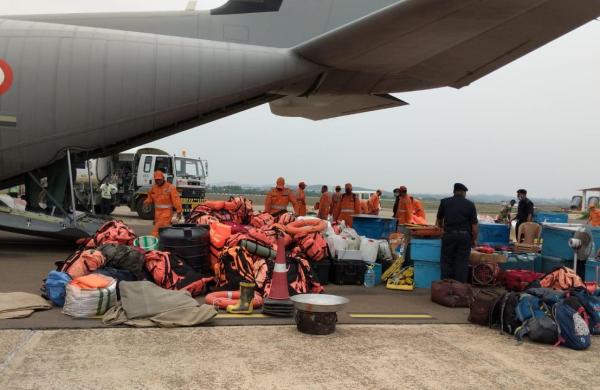 By ANI
SHILLONG: As the landfall process of Cyclone Yaas began on Wednesday, the Eastern Air Command has mobilised its assets to provide a quick response in affected areas.

The Eastern Air Command has set up a Task Force and has coordinated its rescue and relief operations with the state government.

In preparation for #CycloneYaas, 12T of #HADR eqpt and 164 pers of @NDRFHQ were airlifted to Kolkata & Kalaikunda from Arakkonam & Lilabari yesterday, by 2xC-130 and 2xAn-32.Airlift of 4T of load and 41 pers of #NDRF by 2xAn-32 from Lilabari to Panagarh & Durgapur is underway. pic.twitter.com/XDsb9CQXxj
— Indian Air Force (@IAF_MCC) May 26, 2021

“All rescue and relief operations are being co-ordinated with state government and a task force has been set up to monitor and synergise the efforts, in addition to co-ordinating with all agencies,” it said.

Cyclone Yaas’ landfall process started around 9 am on Wednesday morning between Dhamra and Balasore in Odisha and is expected to continue for about three to four hours.

As per the India Meteorological Department (IMD), it is likely to make landfall around noon. Odisha Special Relief Commissioner PK Jena on Wednesday said that by around 1 pm, the tail end of the cyclone is expected to be completely moving to the landmass.