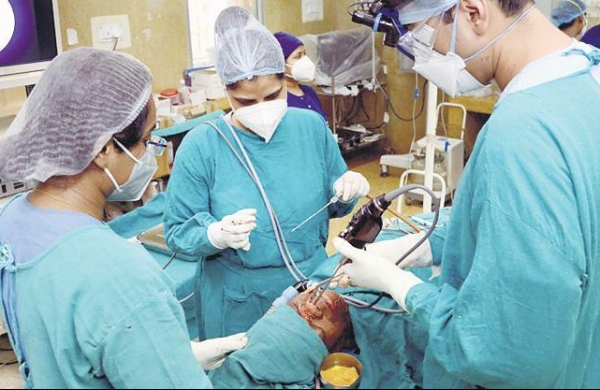 Express News Service
NEW DELHI: With mucormycosis or black fungus cases rising in India by an alarming 32% within a span of three days, the Centre on Wednesday announced that nearly 29,000 more vials of amphotericin B, a first line treatment for the fungal disease, are being allocated to states.

Experts however say that the limited supply of this key drug is greatly hampering the fight against this dreaded disease with 30-50% mortality, leading to higher deaths. Doctors across India are documenting an alarming rise of mucormycosis, mainly among patients with COVID-19 and those who have recently recovered.

As per the figures shared by the Centre, the country till Tuesday night had 11,717 hospitalised patients of this disease while on May 22 this number was 8,848.

The state wise data by the government also showed the maximum cases of the disease, which typically affects, nose, sinuses, eye, brain and lungs in some cases, are in Gujarat with 2859, followed by Maharashtra which has 2770.

Andhra Pradesh on the other hand has registered 768 cases so far while Madhya Pradesh has 752 cases and Telangana has 744 cases thus far.

In Delhi, while 620 cases have been recorded till now, according to Chief Minister Arvind Kejriwal the data shared by the Union government showed only 120 cases.

The Union health ministry has declared it a notifiable disease while 11 states have already declared it as an epidemic.

Many doctors say that the fungal infection may be triggered by the use of steroids, a life-saving treatment for severe and critically ill COVID-19 patients, and is also being seen in diabetics and those with previous history of compromised immunity.

However, black fungus patients without the background of COVID-19 or any other comorbidities are also landing up in hospitals, further deepening this medical mystery. This has led some clinicians to believe that there could be some other contributing factors too, causing more people to catch the infection, which are yet to be understood.

While amphotericinB injections are the drug of choice to treat the condition and up to 60-120 vials may be required for each patient, many patients also require urgent lifesaving surgeries to remove the infection from sinuses, eye orbit or brain.

An acute shortage of this injection over the last few weeks has meant some patients are struggling to recover even after undergoing surgeries.

Union chemical and fertilizer minister Sadananda Gowda on Wednesday announced that the additional 29,250 vials of amphotericin-B drug, are being allocated to states, which include 7,210 vials to Gujarat and 6,980 vials to Maharashtra as part of the 29,250 fresh allocations.

The government last week had said that over 5 lakh vials of this medicine are going to be available by the end of this month through ramped up production and imports.

It also said it has issued licences to five more companies to manufacture the medicine and is in the process of importing 6.8 lakh vials in May and June. The import is part of all-round efforts to ramp up supply and availability of the medicine, stressed the Centre.